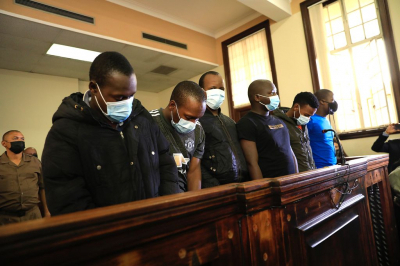 The case of six men linked to the murder of Gauteng Health Department official, Babita Deokaran, has been postponed to 2 and 5 November due to technical issues experienced in court on Tuesday.

The group was expected to continue with their bail application.

Last month, proceedings were postponed after it emerged that the accused had only consulted with their lawyers twice due to challenges at the Johannesburg Prison.

The six men are accused of shooting Deokaran outside her Winchester Hills home, south of Johannesburg in August this year.

The murder is suspected to be a hit as Deokaran was a key witness in the Special Investigating Unit’s (SIU’s) investigation into corruption involving a R300 million personal protective equipment (PPE) tender.

It has since been reported that the Hawks have identified a senior ANC official as a person of interest in the murder. It is alleged that this official ordered Deokaran’s murder.

It's believed that the acting CFO was targeted for blowing the whistle on a multi-million rand PPE scandal in the Gauteng Health Department.

The National Prosecuting Authority says it's not yet ready to go on trial in the murder case.

NPA's Phindi Louw Mjonondwane said, "we are ready to proceed with the bail application but we are not trial-ready. Investigations are still ongoing. Justice rushed may be justice obscured... we have to make sure that justice is served."

More in this category: « Numsa go ahead with strike after talks collapse. Case against Buffalo City Municipality Mandela funeral scandal postponed again. »
back to top