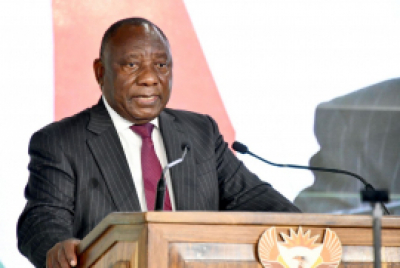 South Africa’s vision of an equal and just society will remain elusive if women continue to shoulder the greatest burden of poverty; struggle to start businesses and face discrimination in the workplace.

This is the sentiment shared by President Cyril Ramaphosa who was speaking in the inaugural Women Economic Assembly (WECONA) – an initiative to facilitate the participation of women-owned businesses in core areas of the economy.

While there is significant progress in some areas, the first citizen acknowledged that South Africa has not fundamentally transformed patterns of ownership, control and benefit in the economy.

"The empowerment of women is, therefore, an integral part of our effort to achieve inclusive growth, create jobs and expand economic opportunities for all," he said on Wednesday.

He reminded guests that the national government has allocated R21 billion to implement the National Strategic Plan over the next few years which is dedicated to economic empowerment programmes.

"Every government department, public institution and private company can and should implement mechanisms to fast-track preferential procurement for women-owned enterprises."

In addition, the current public procurement accounts for 9% of gross domestic product, which is about R500 billion annually, of which 12% went to women-owned enterprises in the first and second quarters of 2021.

However, he said as government expands procurement opportunities for women in government, it would never be enough to answer the need.

"Business, as the key driver of economic growth and employment, needs to step forward," he said, adding that business needs to intentionally use industry value and supply chains as key tools for economic transformation.

"Through value chain transformation, we can promote the development of small, medium and micro enterprises (SMMEs) owned by women, youth and black people."

By allowing them to produce value-added goods and services, the President said companies enable SMMEs to attract investment and employ more people. He highlighted six targets that are needed to advance through these commitments and plans.

These includes increasing the number of women-owned enterprises within the sector, establishing an ecosystem of support for female business owners and employment of women and youth with set targets. In addition, he said rebuilding township and rural economies in an inclusive manner, creating an enabling policy environment and encouraging similar commitments in related industries, was also key.

"If effectively implemented by all stakeholders, our actions will benefit not only the women of this country, but the whole economy through employment creation, increased production capacity and accelerated economic growth."

The President said he would also like to see more women entrepreneurs trained in compliance and registration, procurement and regulatory framework, financial literacy, marketing and access to markets and finance and growth opportunities.

Ramaphosa lamented the underrepresentation of women in almost every part of the economy and as owners in key industries like steel, energy, mining and agriculture.

Meanwhile, women continue to bear the brunt of an unemployment rate, which is nearly 37%, compared to 32% among men.

In addition, the President said, women’s median monthly earnings were 76% of those of men in 2018.

He believed that these disparities not only lead to an imbalanced economy, but also contribute to gender inequality in society.

He raised his concern at the reasons given by children aged seven to 18 years for not attending school. He said 17% of females cited family commitments, while only 0.3% of males did.

The President called on every sector of society to roll up their sleeves and get involved in the process of social transformation.

Government is playing its part by prioritising women economic empowerment as one of the pillars of the National Strategic Plan of Gender-Based Violence and Femicide.

"By improving the economic circumstances of women, we are reducing their vulnerability to abuse and violence. By being less economically dependent on male partners, women have a better chance of leaving an abusive relationship," he stressed.

More in this category: « Trained,motivated teachers key to the effective school system. City of Joburg launches e-Joburg portal. »
back to top