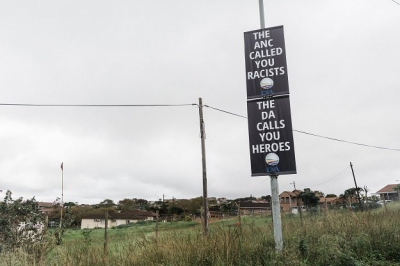 The posters read: "The ANC called you racists" and "The DA calls you heroes".

This is in relation to the deaths of more than 30 people who were killed and more than 50 who were left injured in the area back in July during violent unrests that erupted after former president Jacob Zuma’s arrest.

In Phoenix 36 people were killed, among them young women, young men, old people, "in a very painful way", said Cele.

"Even to an extent that they [relatives] were not allowed to go and identify [them] in the mortuary.

"Even when they are dead they are not allowed to be to be seen.

"For you to come and put extra salt of racism on this matter… I have always had doubts about Steenhuisen. I don’t have a doubt now, I am flabbergasted, to me he is nothing else, he is a thug, he is a political criminal that the nation must deal with as such, he has no conscious, he has no brains whatsoever – for him not to find a problem [with] what happened in Phoenix."

Cele said the team of investigators that was assembled to probe the murders had been hard at work, with 56 people already arrested so far.

"One of the people that is arrested there, he is facing six murders of innocent people that had nothing to do with what was happening. Their sin was that they were on the highway."

On Wednesday, Steenhuisen said he would not apologise for the election posters after they were labelled "shameful and fascist in nature" by the ANC in KwaZulu-Natal.

He said his party was merely defending South Africans who stood up for the rule of law.

More in this category: « Maile refutes DA's accusations that it left Tshwane in shambles. Government unveils new projects that will create over 538 500 job opportunities. »
back to top