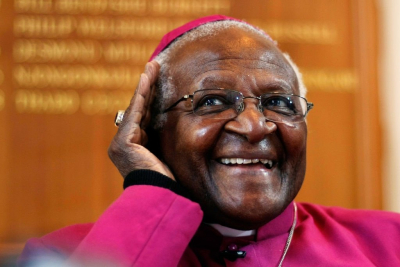 The President wishes the globally renowned former Anglican Archbishop of Cape Town and Johannesburg, 1984 Nobel Peace Prize laureate and Chairperson of the Truth and Reconciliation Commission a happy birthday in the company of his family and friends.

The President paid tribute to Archbishop Tutu for his role as a fighter in the cause for human rights, for equality and for social justice in the 59 years since his ordination.

"You continue to remind us that fellowship, solidarity, charity and compassion for the vulnerable are values common to us all, and we should strive to live by them each day, "Ramaphosa said in a written message to the Archbishop.

"We are further reminded that taking up the struggle for equality and social justice is not the responsibility of only government, civil society organisations or the clergy, but of us all," the President said.

He expressed his deep regard to Archbishop Tutu for a life that has been well-lived in honesty, integrity, fearlessness and service to humanity in South Africa and globally.

Ramaphosa acknowledged the moral and ethical guidance Archbishop Tutu has provided to the nation after liberation.

"At times when we have found ourselves losing our way, you have taken us well to task. For nearly three decades, yours has been a voice of conscience, guiding us and motivating us to do better by our people, "Ramaphosa said.

The President also wished Archbishop Tutu good health and fellowship and companionship with those close to him.

Meanwhile the trustees and staff of the Nelson Mandela Foundation celebrate the 90th birthday of Archbishop Emeritus Desmond Mpilo Tutu. Like many others in South Africa and around the world, we have experienced his life as a blessing.

His contributions to struggles against injustice have been matched only by the depth of his thinking about the making of liberatory futures for human societies.

The Arch is an extraordinary human being, "said Foundation Chief Executive Sello Hatang. "A thinker. A leader. A shepherd."

Archbishop Tutu enjoyed a long friendship with Nelson Mandela, who valued his honesty, courage and fierce independence. As Madiba once said of him: "His most characteristic quality is his readiness to take unpopular positions without fear … He speaks his mind on matters of public morality … such independence of mind is vital to a thriving democracy."These are qualities we need more than ever before.

We wish the Archbishop every blessing as he moves into his nineties.