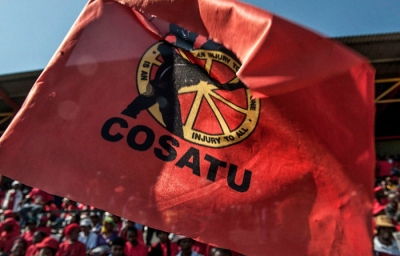 The Congress of South African Trade Unions (Cosatu) embarked on mass strike action on Thursday (7 October) as part of an ongoing dispute with the government, primarily over wages.

The trade federation has asked its members to either join one of its planned activities across the country or withdraw their labour by staying at home on the day.

Cosatu is the largest trade federation in the country, with an estimated membership of 1.8 million workers. "The strike on Thursday is legally protected and is focused on pushing both government and the private sector to act to fix the economic mess that the country finds itself in, and take seriously the issues that are affecting workers and South Africans in general," it said.

We remind workers that this strike is taking place under Covid-19 restrictions, and we urge all our members and the broader society to continue to take precautions. We encourage them to vaccinate because this pandemic can only be defeated through unity and cooperation."

Some of the other demands include:

Cosatu said that it will convene pickets and marches across all the nine provinces and several major towns and cities.

A complete list of the planned activities and the area where strike action will take place can be found on Cosatu’s website here.

A brief overview of the planned action across South Africa’s major cities is detailed below.

Employment and labour minister T.W Nxesi meanwhile, has urged all parties to resolve their industrial issues through social dialogue especially in this sensitive period of mass unemployment and retrenchments.

The minister spoke as one of the major employer organisations, the Steel and Engineering Industries Federation of South Africa (Seifsa) and the National Metalworkers of South Africa (Numsa) are held in a deadlock over pay following the end of their wage agreement in June.

Nxesi appealed to all social partners entering the wage negotiations to work through their issues on the table. He said hostility would not solve differences, but instead risks escalating the severe economic and social damages that have been brought about by the Covid-19.