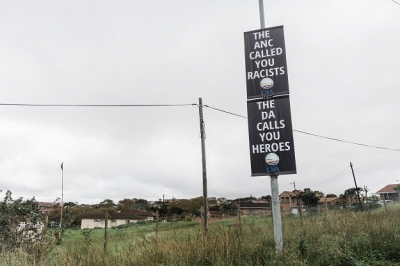 The DA has succumbed to pressure and will be taking down its controversial election street posters in Phoenix, KwaZulu-Natal.

The posters, which read: "The ANC called you racists," and: "The DA calls you heroes," referred to alleged racial tension in Phoenix, which surfaced during the civil unrest in July and left many people dead.

"In my sincere effort to honour the bravery and heroism of law-abiding citizens who were left to fend for themselves during the July riots and insurrections, the posters have regretfully caused hurt to some people. I am deeply sorry and apologise for this," the DA's KwaZulu-Natal chairperson Dean Macpherson said.

"As these posters were unsanctioned by the DA leader, party structures and party campaign leadership, I am arranging the removal of these posters today (Thursday)," he said.

The ANC called the posters fascist while other political parties called on the DA to remove the posters.

Speaking in Phoenix, ANC deputy secretary-general Jessie Duarte said it was good that the DA was taking the posters down.

"We will go ahead with the Human Rights Commission complaint," she said.

Duarte said the posters caused a lot of damage and condoned racism and vigilantism.

DA leaders too publicly disagreed with the posters.

Macpherson said: "My intended message was that in the massive void created by a failing state, unable to secure South Africans' homes and businesses during the riots, some heroic residents were forced to stand up and do what the police and army were unable to do. This action was met with allegations of racism from the ANC.

More in this category: « Green energy key to the infrastructure development - Ramaphosa. Eskom implements stage 2 load shedding. »
back to top