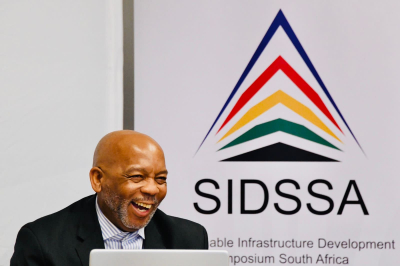 Ramokgopa made the revelation on the second day of the two-day Sustainable Infrastructure Development Symposium - South Africa (SIDSSA). The SIDSSA is the annual flagship event organised by the Investment and Infrastructure Office (IIO) in the Presidency.

South Africa, he said, will require an additional R708 billion in infrastructure investment year-on-year going into the future if the country was to improve its prospects of achieving a 30% of gross fixed capital formation.

Expectation, he said, was that a third of this must come from the public sector.

He said: "It will then catalyse and crowd private sector participation. So, essentially we're talking anything up to around R240 billion in additional investments in the infrastructure space. That’s the appreciation of the scale of the investments that are required".

Before the COVID-19 pandemic, President Cyril Ramaphosa estimated that R1 trillion in infrastructure investments needed to be unlocked over four years.

Ramakgopa said as a result of the pandemic, an additional R240 billion rand from the public sector would now be required. The outstanding two thirds would come from the private sector, he said.

"The R1 trillion is not an imagination, it is derived from science. That's why we went to galvanize the private sector to work with us to address those questions.

"And then the other one is around accelerating the industrialization of the economy broadening the manufacturing base, and in this way you are able to absorb the supply side so that's essentially the context," he said.

Of the 277 "raw" projects unveiled at last year’s inaugural symposium, 68% were at conceptualisation or pre-feasibility study phase.

This, he said, was an area that required improvement into the future.

He said it was critical that a significant proportion of these projects to be post feasibility, at the stage of bankability, “enjoying the confidence of being presented to the Debt Capital Markets for possible funding.

"If we get a large percentage of those to be in that category, or even advanced stages of project lifecycle, then we should be able to deliver this project quicker," said Ramakgopa.

Despite the number this year reducing to 130, he said this was an improvement.

"It means that now project sponsors have quite an appreciation and understanding of the quality of project that needs to be submitted for them to enjoy favour to be taken to the next stage. It means project sponsors are spending a lot of time in project preparation so that the quality of the projects that are coming through are of such a nature that it allows us to graduate them to the next stage."

"It means an eight percentage point improvement on the quality of the pipeline that we're receiving. So, we're likely going to graduate these projects quicker."

Once the projects get financing, they were still required to run the procurement process that was transparent, competitive and provided value for money, as per constitutional prescription for projects financed through the national fiscus.

Projects linked to social housing and the big retail developments were likely to enjoy private sector support if the public sector was to invest in bulk financing. Despite municipal coffers deteriorating in recent time, these remained the responsibility of municipalities.

"Working with the National Treasury and Minister (Enoch) Godongwana that we’ve found a solution. We're likely going to be graduating a lot of these projects, get them to financial close [and] get to implement them," he said.

Of the 50 of the projects announced last year that were funded through the debt capital markets, 29 were either completed or still under construction.

Among the 29 projects were nine developments that were at procurement stage. He said it was important for project sponsors to accelerate the procurement process without undermining the tenants of transparency, value for money and competitiveness.

"Some of them have been through a process of evaluation, I think I know for about three projects. It’s about 12 months now, it's untenable. It's important that we accelerate," he said.

Some of them have been through a process of evaluation, I think I know for about three projects is about 12 months now, it's untenable so it's important that we're accelerating that. So in rand value terms, it means we've raised R340 billion from the debt capital markets through the inaugural SIDSS, R119 billion of that is now in action. That accounts to 29 projects, and then the rest of the remainder... we're still waiting on those projects.

On bulk infrastructure financing, which was largely exclusive to the domain of municipalities, he said deteriorating financial positions were undermining and sterilising the ability of private sector to participate due to unreliable water and power supply.

"If the road network is not sufficient or the capacity is not improved, private sector is unlikely. But also some of the departments, especially human settlement, is unlikely to move."

In this regard, a solution to finance bulk infrastructure had been found.

On the issue of social infrastructure, he said in this regard, there was an absence in the pipeline introduced last year.

"Cabinet took a dim view and said that there has to be greater investments into social infrastructure, because that helps us to meet the constitutional injunctions of universal access," he said.

He said this would provide an opportunity for government to invest in the rural and less affluent provinces.

"We should be able to make it possible for private sector to invest in those spaces. So working with some of the leading pension funds, we've been able to find an instrument, working with the DBSA, will be announcing that financing instrument," he said.

On the private sector, he said the expectation was not about the commercial returns but the impact that these investments are making in the in the economy, society and social infrastructure.

Of the 55, only 40% of the projects were at early preparation stage.

"So 60% are [at] advanced [stage]. What that means is that we stand in good state for us to graduate these projects, and we should be able to in the next time iteration of the SIDDS you will see that they would have moved rapidly."