Mchunu calls on stakeholders to work together on water challenges in Tshwane. 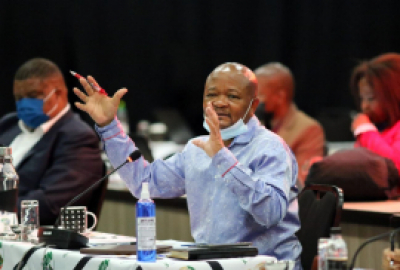 Water and Sanitation Minister Senzo Mchunu has called on stakeholders to work together to address water challenges in Tshwane.

Mchunu made the call during a meeting with the Executive Mayors of the Gauteng Province, held at Gallagher Convention Centre.

Mchunu was supported by Deputy Ministers David Mahlobo and Dikeledi Magadzi, embarked on a three-day visit to Gauteng that got underway on Tuesday. The Minister visited water treatment plants and interacted with the provincial Water and Sanitation management on challenges related to water and sanitation delivery in the province.

The meeting was attended by City of Tshwane Executive Mayor Randall Williams, Member of the Mayoral Committee Phillip Nel, and the executive members of the Rand Water Board.

Speaking after the meeting, Mchunu sad that the meeting agreed that the City of Tshwane would attend to the finalisation of a dedicated pipeline for Laudium to resolve the intermittent water supply challenges.

"The meeting agreed that the upgrading of Rooiwal Wastewater Treatment Plant be accelerated, and that all of the metros would work together to address the current water supply challenges in the province,"Mchunu said.

It was also agreed that the City of Tshwane would work together with Rand Water, to ensure the continued supply of water to Tshwane residents.

On Thursday, the Minister visited the Vaal Project Pump station in Sebokeng.