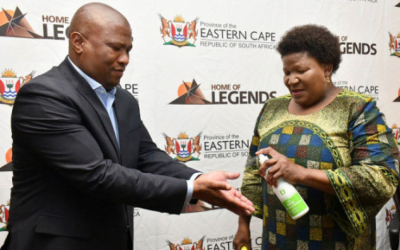 A report by the Public Protector Busisiwe Mkhwebane has revealed that Eastern Cape Premier Oscar Mabuyane and other government officials and private companies irregularly benefitted from R1.1 million earmarked for the memorial service for struggle stalwart Winnie Madikizela-Mandela.

At the time Mabuyane was the MEC for Economic Development, Environmental Affairs, and Tourism.

Mkhwebane released the report on Friday during a virtual briefing.

The investigation found that the funds were deposited into the account of a company owned by the eMbizana Local Municipality manager Luvuyo Mahlaka, Mthombeni Project (Pty) Ltd.

The money was then misappropriated to personally benefit  Mabuyane, the MEC for Transport, Safety and Liaison, Tikana Gxotiwe; and the former MEC for Human Settlements, Babalo Madikizela (now the MEC for Public Works.

"Mr. Mabuyane personally benefitted to the value of R450 000 from the R1,1million, which were certainly public funds that went into the Nedbank account of Allan Morran Design Architectural Services – a private company that carried out renovations at his private house,

"On receipt of the R450 000, Mr. Morran queried the payment. At that point, Mr. Mabuyane’s wife, Ms. Siyasanga Mabuyane, advised Mr. Morran, through an email that the deposit of R450 000, 00 was to be used for renovations of the Mabuyanes’ private house. Despite this, Mr. Mabuyane denied any knowledge of the arrangements between Mr. Bam and Mr. Madikizela," said Mkhwebane.

The ANC in the Eastern Cape benefitted R280 000 according to the report, the monies were deposited into the party's fundraising account.

"Mr. Madikizela personally benefitted to the value of R350 000.00 from the R1.1million, which were certainly public funds that went into the FNB account of IPM Plant Hire CC, a private company owned by his wife Ms Zona Zetu Siyazithanda Madikizela as set out in evidence," added Mkhwebane

Mkhwebane said the activities have been reported to the Hawks and are under investigation.

She has also recommended that the speaker of the Council in Mbizana take urgent steps to ensure that the municipality institutes disciplinary proceedings against Mahlahka for financial misconduct within 60 days.

The speaker of the Eastern Cape Provincial Legislature must within 60 days table the report in the legislature.

More in this category: « SA,Palestine express concern at Israel's accreditation to the AU. Hawks nab directors accused of claiming R10 million of COVID-19 TERS. »
back to top