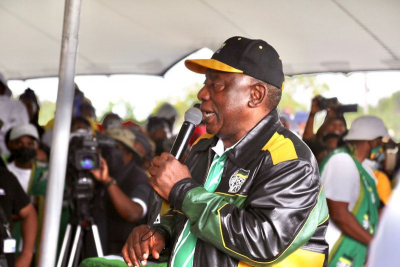 President Cyril Ramaphosa lobbied the community of Tlokwe in the North West for their votes on Friday.

He met with community leaders, some draped in ANC colours, at the Methodist Church in Promosa.

"I would like to ask him about unemployment and the power supply," said one resident.

Another man said that he wanted  ANC’s government to help him get the title deed for his home.

Before responding to the concerns of community members, Ramaphosa said: "I am very happy to be here in Promosa. Before we begin, let me see all those who are wearing their masks. Forward with vaccination."

He reiterated the importance of getting vaccinated, saying "it is our only defence to the deadly disease".

Ramaphosa promised to continue to build houses, pay grants and electrify the area.

"All the good things the ANC has introduced will continue. We want to build a non-racial SA when other parties want to divide the country."

Meanwhile the coloured community of Danville in Mahikeng in the North West said the African National Congress (ANC) has marginalised them.

They accuse the party of not including them in leadership structures and in the provincial legislature.

They also decry the bad state of service delivery in their area.

The North West ANC IPC spokesperson Kenny Morolong said the party has no intention of marginalising any racial groupings.

"We have no intentions of marginalising other national groups. The ANC respects the role played by all national groups in the struggle against apartheid and in building the African National Congress to be what it is, a mass based movement, for all South Africans," said Morolong.

Last week, community members in Ward 41 at Meriting in Rustenburg in the North West threatened to disrupt voting on election day if the ANC does not address their concerns.

The ruling party has intensified its campaigning, with other senior members also expected to visit KwaZulu-Natal and the Western Cape over the weekend.

Elsewhere Azanian People’s Organisation (AZAPO) president Strike Thokoane did not attend the launch of the party’s election manifesto at Ga-Phaahla outside Jane Furse in Limpopo because he’s been admitted to hospital.

The details of his condition have not been disclosed. The party’s honorary president Professor Mosebudi Mangena was standing in for Thokoane.

Provincial chairperson Ngoako Moyaha said they were launching AZAPO’s manifesto under the theme "Take back your power".

"Once the voter understand the power, the elected candidate will respect the voter because the voter can immediately recall him if he is not delivery according to the community he is serving. Our manifesto is accordingly launched by our president Ntate Strike Thokoane but we got a message very late in the evening that he got health issues that are urgent. As we talk now he is not well and we wish him a speedy recovery," said Moyaha.

More in this category: « Government calls for collaboration to unlock the investment potential. South Africa exited third wave as COVID-19 cases stabilise. »
back to top