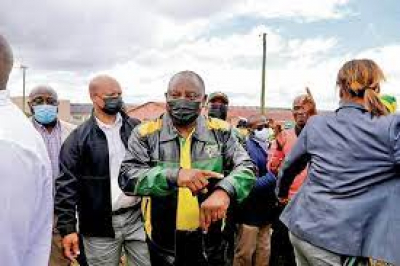 The African National Congress (ANC) party president, Cyril Ramaphosa is in eThekwini, KZN, the biggest ANC region in the country. But the metro is under threat as most parties, including the IFP and DA, are vying for it.

There are more concerns about the ANC election candidates list.

Party members clashed in KwaZulu-Natal on Saturday as Ramaphosa campaigned.

Ramaphosa promised to resolve all issues regarding the candidate's list and has urged people to vote for the ANC in the municipal elections.

Meanwhile outgoing Midvaal mayor Bongani Baloyi has become the latest high-profile DA member to slam the decision by the party to put up posters appearing to praise vigilantes in Phoenix.

The two posters, which read "The ANC called you racists. The DA calls you heroes", were in reference to the vigilante action of residents of Phoenix after the death of 36 people during the pro-Jacob Zuma unrest which erupted in the country in July.

"It should never have happened, it was a mistake and I think listening to one of the [community] groups, I think it's the peace committee in Phoenix, I mean they made it clear on how this has undermined the work that they have put in place and what they are doing on the ground.

"And I think we must have a big appreciation for that. Never mind whether we are trying to be politically correct or not, it was really ill-advised to put such a poster in that area. And I am really happy that they are taking accountability for it and removing the posters, "said Baloyi.

De Villiers is the mayoral candidate for the GOOD Party in the Drakenstein Municipality.

The outspoken former rugby mentor is campaigning in Wellington in the Western Cape today.

The GOOD Party will be contesting in five provinces during the elections.

"I have heard about many challenges in this municipality, housing, municipal services, indigent grants, illegal dumping, violence and crime," he said.

More in this category: « Report shows weakness in SA’s anti-money laundering systems. DBE to introduce new history curriculum in 2024. »
back to top