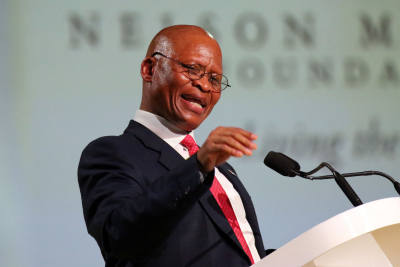 President Cyril Ramaphosa has hailed Chief Justice Mogoeng Mogoeng’s decade long-term at the helm of the Constitutional Court as one characterised with fearlessness, integrity and resilience.

The term of the Chief Justice is expected to come to an end today.

"Today we pay tribute to Chief Justice Mogoeng for endowing South African jurisprudence and the democratic order more broadly with judicial integrity and resilience which has impacted positively on the lives of citizens and advanced accountability.

"Following a decade of outstanding service and leadership, Chief Justice Mogoeng leaves a rich legacy for our democratic culture, our judiciary, the legal profession and ordinary South Africans," the President said.

"Chief Justice Mogoeng’s leadership inspired a judiciary that was fearless in holding those in power to account and empathetic to the plight of individuals and groups in our society. This has deepened international regard for South African jurisprudence, for the integrity, effectiveness and efficiency of our democratic institutions, and for the separation of powers enshrined in our Constitution.

"Chief Justice Mogoeng presided over our judiciary during a decade which was challenging in many ways, but during which our judiciary held firm and enabled the renewal of our society" he said.

The President wished him well in his retirement.

"Having served the nation with such distinction since September 2011, Chief Justice Mogoeng is now able to devote himself to more his personal interests, even though we know he will continue to be an important figure and voice in public life, "Ramaphosa said.

The process to appoint a new Chief Justice is currently underway with eight people qualifying for a nomination to lead the apex court.

South Africans have until 5pm on Friday to submit objections to the nomination of any of the nominees with their biographies available on The Presidency's website.

Meanwhile the Presiding Officers of Parliament have paid tribute to the outgoing Chief Justice Mogoeng Mogoeng.

Justice Mogoeng, the fourth Chief Justice of South Africa since the advent of democracy, served the country and its people outstandingly and remarkably since taking over from Chief Justice Sandile Ngcobo in 2011.

The Presiding Officers, led by National Assembly Speaker Nosiviwe Mapisa-Nqakula and National Council of Provinces Chairperson Amos Masondo, commended the Chief Justice for his exceptional contribution made to the country’s constitutional democracy by strengthening the role of the Constitutional Court during his tenure.

"We salute him for remaining faithful to this country - both in word and in deed, even under trying circumstances in the evolution of our constitutional democracy and for upholding and protecting the Constitution and the human rights entrenched in it, and for fulfilling his responsibilities without fear, favour or prejudice," the Presiding Officers said in a statement.

The Presiding Officers said this moment calls on everyone to remind themselves about the critical role of the judiciary, as a pillar of the country’s constitutional order.

"Justice Mogoeng embodies exemplary leadership and we are convinced that he leaves behind a stronger Constitutional Court," Mapisa-Nqakula and Masondo said.

More in this category: « Mpumalanga MEC arrested for murder & attempted murder. Sanral calls on government to make a decision on e-tolls. »
back to top