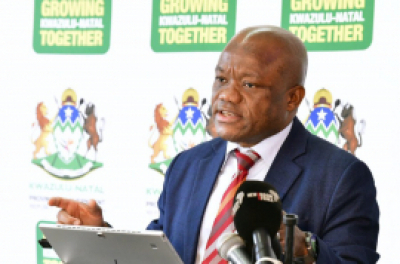 KwaZulu-Natal Premier Sihle Zikalala has called for the ring-fencing of the maintenance budget at all levels of government to cater for the regular and scheduled maintenance of public infrastructure.

Speaking during the recent handover of the newly-refurbished Pholela High School in Bulwer, Zikalala said it is not enough to build new infrastructure, but then fail to maintain it.

"The democratic government has since 1994, delivered social and economic infrastructure worth hundreds of billions of rands. The challenge however, remained with regard to maintaining the infrastructure especially schools, clinics and sports fields," Zikalala said.

The renovated Pholela High School was completed last month after undergoing major refurbishment of close to R100 million, after falling into a state of disrepair over the decades.

The Premier said that what they have seen each time they visited the school, was a good example of what happens when infrastructure is not routinely maintained.

"This is one of the most fundamental weaknesses in our system. The democratic government has delivered houses, basic services, access roads, clinics, hospitals and schools and placed billions of rand worth of infrastructure in the hands of the citizens of KwaZulu-Natal.

"What we learn from the example of Pholela High School and similar structures, is the need to make provision in our budgets for maintenance. During the State of the Province Address this year, we identified this vital cog in the management of our assets as key to continued delivery of services by local government,"he said.

Pholela High School was established by the Presbyterian Church in 1921 and is now under the KZN Department of Education.

The current site was handed over on 19 September 2019 and took 18-months to complete on a budget of R 90 921 924.74. The school has been supplied with equipment for Information and Communication Technology (ICT), Maths, Science and Technology to the value of R3.5 million, which will serve 1 000 learners.

Zikalala commended the teachers and learners for their dedication and discipline to overcome the obstacles that were stacked against them.

"The future looks bright if the past trend of Pholela’s matric performance is anything to go by because the 2020 Matric Class obtained a 90% pass rate. Now that the school has been renovated and refurbished, we expect the 2021 Pholela High School Matric Class to achieve nothing less than a 100% pass rate pass in 2021 and beyond," Zikalala said.

"The most important means of attaining equality is education. I'm very impressed that the provincial Education Department is not only focusing on building and refurbishing schools, but they are also focusing on skills that will improve the GDP (Gross domestic product) of the country," Dlamini-Zuma said.

Mshengu said his mandate is to equalise education, and government realises that it is not about parents sending learners to urban and well-resourced schools.

"We need to bring better quality education to rural and townships schools. That includes better-trained teachers and resources that are relevant for quality teaching and learning," Mshengu said.

Mshengu added that there is an all-encompassing project to modernise teaching and learning, and the department is handing over tablets to all 6 000 school principals.

"Today we have 465 for the principals of Harry Gwala. All the principals will have tablets before the end of the year. We will now save documents on cloud, hold meetings online and be able to research the best ways of managing the school,"Mshengu said.

More in this category: « At least 9 killed in tragic bus crash on the N3, KZN. Law firm appointed to investigate controversial Enoch Mgijima Municipality stadium. »
back to top