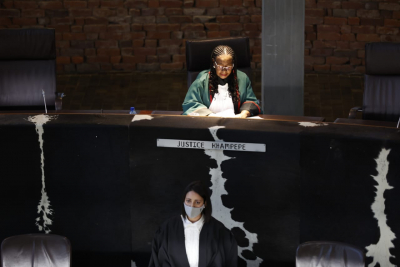 ConCourt Justice Sisi Khampepe handing down the judgment on former president Jacob Zuma, who was sentenced to 15 months in prison.Photo Credit: Thulani Mbele.

Justice Sisi Khampepe, who read out the Constitutional Court judgment that sentenced former president Jacob Zuma to jail for 15 months, has officially retired after a more than 40-year career.

Monday marked Khampepe's last day in her legal career, with acting chief justice Raymond Zondo praising her role on the country's apex court when it came to matters involving women, children and other vulnerable members of society.

Monday was also the last day in office for justice Chris Jafta, who has also retired. He was a ConCourt justice for 12 years.

Zondo — who is acting in the chief justice position after the long leave and subsequent retirement on Monday of justice Mogoeng Mogoeng — acknowledged the roles that Khampepe and Jafta played.

Khampepe, who hails from Soweto, travelled the country and parts of the world seeking education that nurtured her illustrious law experience.

In 1995, Khampepe was appointed by former president Nelson Mandela as one of the commissioners of the Truth and Reconciliation Commission.

In 2004, President Thabo Mbeki appointed her together with now-retired Justice Dikgang Moseneke to oversee the Zimbabwean elections.

She gained popularity when she chaired the Commission of Enquiry, popularly known as the Khampepe Commission, between 2005 and 2006.

The commission looked into the mandate and location of the Directorate of Special Operations, commonly known as the Scorpions.

She was also the vice-chairperson of the National Council of Correctional Services from 2005 to April 2010.

Khampepe was appointed as a judge of the Gauteng Division of the High Court in December 2000.

She later served as Acting Deputy Judge President of the Labour Appeal Court and Labour Court.

Jafta began his career as a court interpreter in 1983 and was appointed as a District Court Public Prosecutor at the beginning of 1984.

In December 1985, his authority to prosecute was withdrawn by the attorney-general at the insistence of the apartheid government security police and he was demoted to the position of an administrative clerk.

This occurred after he had rejected instructions from the security police on how he should conduct prosecutions in some cases.

Jafta was briefly detained and subjected to an intense interrogation by the security police.

In 1997, Jafta was appointed as an acting Judge of the High Court Transkei Division for four months and was permanently appointed two years later.

Between June to October 2004, he was an acting Judge of Appeal in the Supreme Court of Appeal in Bloemfontein.

In November 2004, he was appointed as a Judge of Appeal in the SCA.

In October 2009, Justice Jafta was appointed as a Justice of the Constitutional Court until 11 October 2021.

In paying tribute to Jafta, Zondo said he had "made a huge contribution to this country’s jurisprudence.

Zondo has also thanked outgoing Chief Justice Mogoeng Mogoeng for his decade of service as the head of the court and his commitment to the judiciary.

Chief Justice Mogoeng’s term came to an end on Monday, following ten years as the head of the Constitutional Court.

"Through his outstanding leadership Chief Justice Mogoeng Mogoeng greatly enhanced the standing of the Judiciary in our country. He served this country as Chief Justice during some of the most difficult times in our constitutional democracy and was able to lead the Judiciary with courage, integrity and wisdom," Zondo said.

He added that Chief Justice Mogoeng made stellar contributions to the respect of the rule of law through groundbreaking judgements.

"[He] also made a huge contribution to our jurisprudence and wrote some of the most important judgments that have helped to strengthen and promote the rule of law, the supremacy of the Constitution and the Bill of Rights.

He thanked Chief Justice Mogoeng for his dedication to the judiciary over the past decade.

"We thank the Chief Justice for leading the Judiciary with distinction, for his humility and for his integrity. We thank him for his outstanding service to the people of this country. We thank his wife and family for giving him strong support during his term of office and for allowing him to devote as much time as he did to the service of the nation, "he said.

More in this category: « Government's state of disaster extended by another month. Government begin with public consultations on new marriage laws. »
back to top