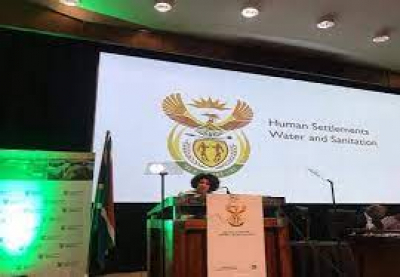 Water and Sanitation Minister, Senzo Mchunu, has encouraged different stakeholders to work together to ensure that there is clean water for the residents of Emfuleni.

Mchunu made the call during his visit to Emfuleni Local Municipality in the Vaal.

Together with his two deputies, David Mahlobo and Dikeledi Magadzi, Mchunu visited several waste water treatment plants in Emfuleni, with the aim of finding a permanent solution to the sewage spillage in the Vaal River.

Mchunu said the department needs to locate the problems in the whole system, mainly spillage into the river and sewer spillage into residential areas.

"Those are the two things that we are focusing on here. Before we finalise this, we have to look at the root cause, including pump stations, pipes from residential areas, pump stations and waste treatment plants.

"The plants are half functional [and] the pump stations are either very low in terms of functionality or have not been functioning… [Work] has started,”"Mchunu said.

Speaking during public engagement with various stakeholders and NGOs, Mchunu warned that the department is not going to succeed unless it works with everyone in the provinces, so that “if there is any change in government, the project doesn’t change, including [after] fixing of all these problems”.

"Work must be done at a level that is acceptable [and] will keep all the systems working. At the end of the day, we want the Vaal River to be functional, and to be able to assist economically and otherwise," Mchunu said.

He also assured that government has the political will to find a permanent solution to the sewage spillage. He said the department has invested a sum of R100 million towards Phase One of the Sebokeng Bulk Waste Water Treatment Project.

The whole project, Mchunu said, depends largely on government’s political will, more than pumping of millions of rands into the project.

"The political will is there and it is critical to finding a permanent solution to the problem of sewage spillage at Emfuleni."

The Minister used the occasion to extend government’s apology to the local community for lowering its guard, which led to the sewage spillage.

"The biggest mistake that everyone has made was to turn Vaal River into a curse of pollution. The spillage of sewage into township houses was an unforgivable sin [and] the local communities were also wrong to destroy water and sanitation infrastructure.

"The last sin that we have committed as government was to lower our guard. I don’t appreciate the failure to protect our precious river. We would like to extend our sincere our apology to the local community for our sins," Mchunu said.

"The cleaning and reinvestment into the Vaal River is central to everything that is geared towards the regeneration of the economy in the Vaal.

"The Vaal Dam is the source of water for the Gauteng. However, the damage of infrastructure in the Vaal is a source of great concern," Makhura said.

South African National Civic Organisation (SANCO) chairperson in the Sedibeng Region, Mlungisi Hlongwane, said the lack of proper consultation with local stakeholders in the Vaal has not helped to bring awareness on the sewage spillage.

Meanwhile Mchunu, has commended the KwaZulu-Natal Water Master Plan which spells out the water-related challenges and outlines the short, medium and long term solutions to ensure water security in the province.

Initiated by the provincial government and launched last month, the KwaZulu-Natal Water Master Plan and Borehole Intervention Programme aims to improve access to safe and clean water in rural communities for domestic consumption, agriculture and other economic activity.

Mchunu - who is currently on a three-day visit to assess the state of water projects in the province and accelerate the delivery of water and sanitation in the province - said the master plan is a step in the right direction.

"We will take it as work in progress and refine planning as we go. At this moment, we have to pinpoint communities without water and ensure effective implementation of the plan," Mchunu said.

More in this category: « 'Let us recommit ourselves to promotion and protection of LGBTIQ+ community' - Lamola. Mabuyane says Hawks probe is a political witch-hunt against him. »
back to top