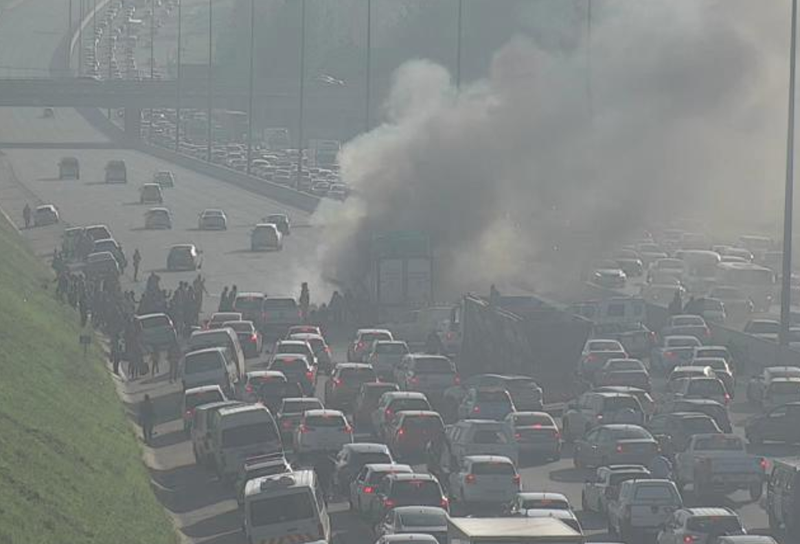 Traffic was severely interrupted on the N1 near the William Nicol off-ramp in Johannesburg when a passenger bus travelling from Cape Town to Zimbabwe caught fire.

JMPD spokesperson Wayne Minnaar said the bus was still on fire at around 08:20 and that firefighters were on the scene battling the blaze.

The cause of the fire is not clear. Video footage shows the bus and the luggage trailer engulfed in flames.

"Traffic on the N1 North is being diverted from William Nicol on to Witkoppen, joining the N1 again at Rivonia Road," Minnaar said.

At least 17 passengers have been left injured after a bus caught fire on the N1 North, authorities said.

Emer-G-Med confirmed that 17 people sustained injuries and were being taken to hospital. Fatalities could not be confirmed at this stage.

《Fourways》#M07, #F01, #A02 is currently on scene on the N1 North after the William Nicol Drive off ramp for a bus that has caught fire. Injuries are still being assessed. The N1 north bound has been closed causing massive traffic delays. @GTP_Traffstats @_ArriveAlive pic.twitter.com/84yBpld71r

Tweet
More in this category: « Cyril Ramaphosa is expected to meet with Eskom management amid electricity crisis. Cyril Ramaphosa: The intelligence services to investigate the claims of sabotage at Eskom. »
back to top