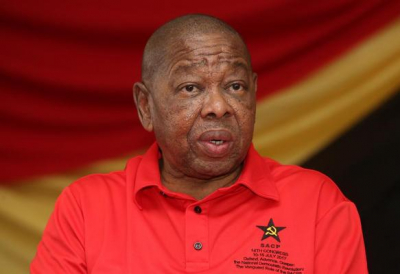 Slovo dedicated his entire life from the young age of 16 to the cause of liberation, and social emancipation of the working-class. This for him included ending male domination and oppression of women and girls—that is patriarchy—and building a non-sexist society. Slovo’s dedication to the transformation of South Africa to become a non-racial and non-sexist democratic and prosperous society did not end with his death, however.

In celebrating his life, we commit to pursue this struggle further. Slovo was a scientific socialist. To continue his legacy, we need to intensify the struggle for socialism and unite the working-class for the final victory towards complete liberation and social emancipation.

Slovo’s choice of the Avalon Cemetery as his place of burial was part of his commitment whilst alive to break the barriers of racial segregation, even in his death. One of the largest graveyards in South Africa, Avalon Cemetery is in Soweto, the largest township in the country, now home to over one million people.

The White only colonial government of South Africa created Soweto in the 1930s as part of its racist human settlements policy to create Black townships, also pushing away Black people from major towns and cities.

During that time, the British monarch was the head of state of the colonial South African state, a subordinate of Britain as a colonial power. The apartheid regime consolidated the segregationist agenda under the "Bantu Homelands Citizenship Act, 1970", by creating the Bantustans.

When he was 15 years old, Slovo left school to look for work. He was compelled to do so by his working-class and poor background. That was when his lifelong contribution to the struggle of workers’ rights, the struggle for liberation and democracy began. Two important developments occurred a year after his employment as a dispatch clerk for a chemist, shaping a lifelong dedication to the struggle.

When he was 16, Slovo was elected a shop steward of the National Union of Distributive Workers. He became involved in leading a strike that won workers’ demands, but he was gravely disturbed when Black workers were excluded from benefitting from the gains of that action. The same year, 1942, he joined the Communist Party to wage the struggle against the racist, capitalist, colonial regime. He remained unquestionably loyal to the struggle for over five decades from 1942 until his death on 6 January 1995.

During the Second World War, Slovo overstated his age so he could go to fight against Nazism and Fascism. Upon his return from the war, he gained admission at the University of the Witwatersrand based on life assessment, having left school at the age of 15 without completing the equivalent of matric today. It was at Wits where he met his first wife, Ruth, a communist cadre in her own right, and Nelson Mandela as students. Slovo excelled, winning himself a degree in law. He started working as a lawyer, with more focus on defending the stalwarts of our struggle, after obtaining his law degree.

Slovo was one of the key leaders of our struggle, a great theoretician, strategist, and tactician. He was involved not only in intellectual activity but also in the realm of practical action to change the world for the better. He was a founder member of the Congress of Democrats following the banning of the Communist Party under the "Suppression of Communism Act, 1950". Together with his wife, Ruth, daughter of the SACP National Treasurer, Julius First, and Matilda (neé Levetan), Slovo was among the first to be banned under the draconian legislation.

During their trial, Slovo simultaneously formed part of the defence legal team. The charges against him and several others were dropped in 1958 and for the rest of the accused in 1961. That was however short-lived because Slovo and others were arrested during the state of emergency declared by the apartheid regime after the Sharpeville massacre of 21 March 1960.

When the joint SACP and ANC military wing uMkhonto weSizwe (MK) was formed in 1961 Slovo, together with former President Nelson Mandela co-founded its High Command, with the SACP headquarters at Liliesleaf Farm as the operations centre. When the apartheid regime arrested our stalwarts at Liliesleaf Farm, leading to the Rivonia Treason Trial between 1963 and 1964, Slovo was on an external mission. He had to remain in forced exile for 27 years performing SACP, ANC and MK work. Slovo was involved together with other comrades in producing the key documents of our struggle. We already mentioned the Freedom Charter. The documents include the popular ANC Strategy and Tactics adopted in 1969, the Green Book, and major SACP documents, to name but a few.

Slovo formed part of the Revolutionary Council established after the ANC Morogoro Consultative Conference where the first Strategy and Tactics was adopted. He formed part of the Politico-Military Council that replaced the Revolutionary Council in 1983 made up of leaders drawn from the ANC, SACP and the South African Congress of Trade Unions, SACTU. Two years later, in 1985, he was elected as the first white person to serve on the ANC National Executive Committee (NEC). The same year he became the MK Chief of staff and the following year the SACP General Secretary. He was succeeded by Chris Hani in both the two roles respectively in 1987 and 1991.

At our first Congress back in South Africa in 1991, Slovo was elected as the National Chairperson of the SACP. Following our first democratic election in 1994, President Nelson Mandela appointed Slovo, who was elected as a Member of Parliament, to serve as the first Minister of Housing in the democratic dispensation. Slovo served our people with great dedication in the three roles – as the SACP National Chairperson, ANC National Executive Committee Member and Member of Parliament, as he had in all his previous roles, until his death on 6 January 1995.

Slovo was also a key player in our transition to democracy. He was a key negotiator and participant, representing the SACP, in the negotiations principally between our movement and the apartheid regime and in the multi-party talks that led to the 1994 democratic breakthrough. He also penned the paper titled "Negotiations: What room for compromise". For first time openly the idea of a government of national unity emerged. The paper led to a huge debate within the movement, but also made a huge contribution in creating some consensus, though never 100 per cent, on our approach to some key aspects of the movement’s negotiations strategy and the transition to democracy.

This year also marks the centenary of the founding of the Communist Party in July 1921. We are indeed commemorating Slovo’s passing under vastly different conditions. Today we face new challenges and multiple crises of the global capitalist system. We are called upon to rise to the occasion.

On this day, twenty-seven years ago departed one of our country's foremost revolutionary thinkers, who had led from the front in the fight to dismantle the evil apartheid regime.

It was Cde Slovo’s steady and reliable leadership and exemplary that conduct made him the cherished and appreciated revolutionary that he still is. He still has a lot to offer us as we grapple with the current state of our nation and trying to formulate a response to the current challenges.

He was a true soldier and a theoretician who never succumbed to the trappings of his position. He never shied away from acknowledging and confronting the failings and inadequacies of either the revolution or revolutionaries. He did more than most in helping to lay a foundation for a socialist future in South Africa with his insightful political analysis and revolutionary conduct.

This commemoration arrives at a time when the country is amid a deep-seated and multiple crises of capitalism that has seen the nation languishing in the longest ever economic slump that began in 2009.

While COVID-19 has exacerbated this crisis, we need to acknowledge that this is a structural crisis that affects all dimensions of life. With its manifestations in the economy,energy, climate, food,water, finance, it is the utmost demonstration of the historic failure of the capitalist mode of production.

The capitalist system has not just created record unemployment, but it drives an accumulation strategy that has led to attacks on the working class, including massive cuts in wages to increase profits.

The state has responded to this depressing situation and gloomy economic reality by carrying out social downsizing and austerity attacks that have included generalised cuts in social budgets including in health and education.

In our country like anywhere else in the world, the crisis and the offensive of capital has intensified the exploitation of women. Millions of women live below the poverty threshold. Capital has coerced women into low paying jobs and vulnerable economic sectors, into casualised, contractual and feminised jobs.

It is clear for all to see with the unemployment numbers, widening inequality, and poverty level that this system cannot be mitigated by neoliberal shock therapies consisting of bailouts, tax subsidies and other incentives.

On this occasion where we remember Cde Joe Slovo, the working class needs to do an honest introspection on what has gone wrong and what needs to happen to fix and improve this dire situation for the working class.

As we work to develop a comprehensive program for 2022, a very busy political year, we need to focus on two twin priorities that will make it easier for the working class to survive this epoch and ultimately prevail.

Workers need to work to build a strong vanguard party of the working class and pay close attention to the theory of Marxism-Leninism to rebuild class consciousness. The Federation has committed itself to ensuring that the working relationship between itself and the SACP is strengthened.

The SACP of Joe Slovo both independently and through its hegemonic role in influencing mass formations and the ANC itself, has undeniably earned itself the mantle of a vanguard party of the working class in South Africa.

Our role as workers is to ensure that we work to build an SACP that is organisationally positioned to carry out the tasks of the moment. An organisationally strong SACP should be rooted amongst working class communities as primary sites of building working class power to lead a popular movement for socialism - in concrete terrains of struggles.

Let’s honour Cde Joe Slovo by lifting and imitating his honest personal qualities and building a strong vanguard party of the working-class that he will be proud of.

More in this category: « Over R30m needed to repair & rebuild NW houses affected by heavy rains. France now open to all fully vaccinated South African travellers. »
back to top