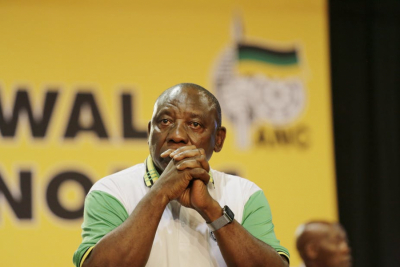 ANC president Cyril Ramaphosa on Thursday had to abruptly leave what was supposed to be a memorial lecture in memory of Lillian Ngoyi at the Lebowakgomo Civic Centre in Ga-Mphahlele in Limpopo.

According to ANC Women’s League (ANCWL) secretary, Meokgo Matuba‚ Ramaphosa left because of failure to comply with Covid-19 regulations.

"We sincerely apologise for what happened. We must not push the narrative that the president walked away from the event … because it was due to Covid-19 regulations that he had to leave" said Matuba.

"We’ve been advised that when they look at the current situation, we’re non-compliant."

Ramaphosa recently tested positive for Covid-19 and self-isolated for a week in Cape Town. The country is on adjusted Covid-19 alert level 1.

"Gatherings are restricted to no more than 1,000 people indoors and no more than 2,000 outdoors," cabinet announced on December 30.

"Where the venue is too small to accommodate these numbers with appropriate social distancing, no more than 50% of the capacity of the venue may be used. All other restrictions remain in place."

ANCWL president Bathabile Dlamini said the league did not view the president leaving as a snub.

The event was set to begin at 13:00, but it was cancelled due to non-compliance with Covid-19 protocols.

Even before the president's arrival, several ANCWL leaders kept cautioning those in attendance on the need to adhere to regulations, however, the size of the venue made it impossible to adhere to the 1m distance rule.

Meanwhile Deputy minister of State Security in the Presidency Zizi Kodwa said South Africans should not be concerned about the "general" safety of South Africa and the president.

Kodwa was seen whispering something into Ramaphosa’s ear before he, along with his security detail walked out of the building.

He would not be drawn into disclosing what he had whispered into the President’s ear.

"There was no security threat against the President. There shouldn't be any concerns, not only January 8, but generally, there are no issues about threat and risk, but from time to time we do make assessments,said Kodwa."

More in this category: « Cosatu calls for prosecution of those implicated in state capture report. Omicron may be less severe in young and old, but not 'mild' - WHO »
back to top