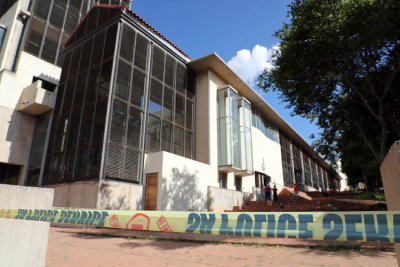 The scene of the Constitutional Court in Braamfontein, Johannesburg, where a 36-year-old man was arrested for allegedly breaking the windows of the building using a hammer.Image: Antonio Muchave.

Speaking on behalf of the Judiciary on Thursday, Zondo said he noted with grave concern the attack at the Constitutional Court building, which has been widely reported in the media.

This incident comes shortly after other important State facilities have experienced unprecedented attacks, including recent threats having been made to cause damage to some Superior Courts.

"These attacks and threats seek to cause the destruction of these important facilities that the public rely on for the protection of their constitutional rights," Zondo said.

The Acting Chief Justice said he was satisfied with the report that security officials and the police were able to act swiftly to apprehend the suspect and prevent further damage to the building.

However, he said the incident must be viewed in a very serious light and urged all law enforcement agencies to do everything in their power to put proactive measures in place to avert similar attacks going forward.

Furthermore, the Judiciary appealed to all relevant organs of the State and functionaries responsible for State facilities and security services to ensure a threat and risk-based assessment of arrangements around critical court facilities and its important assets.

"It is necessary to mention that this incident does not in any way hamper the Justices and court staff members from performing their functions. However, due to such incident, the security of the Judiciary, the supporting staff and the general court users, remains compromised and requires urgent attention,"Zondo said in a statement.

Despite the damage to the court facility, no one was injured and the work to have the damage repaired has already commenced.

The Acting Chief Justice said he trusts that the investigation by law enforcement agencies will reveal the motive behind this incident.

More in this category: « Ntshavheni to engage Telkom in a bid to reach an out-of-court settlement over spectrum auction. Western Cape premier Alan Winde calls for state of disaster to be lifted. »
back to top