Western Cape premier Alan Winde calls for state of disaster to be lifted. 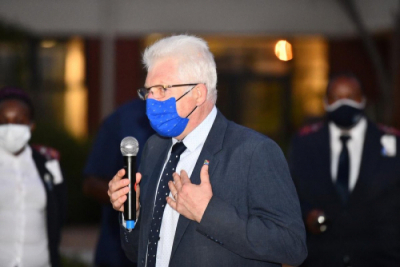 Western Cape premier Alan Winde has reiterated calls to end South Africa’s state of disaster as the country looks to bounce back from the Covid-19 pandemic in 2022.

In a media briefing on Thursday (6 January), Winde confirmed that the Western Cape has now passed the peak of its fourth wave of Covid-19 infections, with a consistent decline in cases expected in the coming weeks.

T"his is now unquestionable data that we have the ability and capacity to manage Covid-19 without a disaster declaration, and that the time has come to normalize our response,"he said.

"We do not need the national state of disaster, which is an extreme tool imposed with the primary intention of protecting our health platform. It must be allowed to expire by minister Nkosazana Dlamini-Zuma."

Winde said that the national government has had more than enough time to put in place alternative management systems outside of a disaster declaration.

"I already called in October last year for a roadmap to be made public that would enable the termination of the disaster now. The public and the economy should not be expected to wait any longer."

The premier said that focus must now turn to the country’s 'second pandemic' in its worsening jobs crisis. "A job is a ticket out of poverty. It is the best way to fight crime. It prevents hunger and ensures children can grow healthily, getting onto a ladder of opportunity. We need to fight this pandemic with the same energy and passion, and the Western Cape Government intends to do so."

While the national state of disaster was initially set to lapse on 15 June 2020, the legislation provides that it can be extended by the Cooperative Governance and Traditional Affairs minister by notice in the gazette for one month at a time before it lapses.

However, Cooperative Governance and Traditional Affairs minister Nkosazana Dlamini-Zuma has confirmed that the government is in the process of developing sustainable regulatory measures needed for the control of Covid-19 beyond the national state of disaster in terms of existing legislation.

In a December parliamentary Q&A, Dlamini-Zuma said that while the government cannot give a specific date on which it will end South Africa’s state of disaster, it was receiving active attention.

"It is important to reiterate that all lockdown restrictions will be lifted and the state of disaster will be terminated as soon as it is determined that the need to augment existing legislation and contingency arrangements through the disaster management regulations is no longer required to assist and protect the public, provide relief to the public, protecting property, preventing or combatting disruption or dealing with the destructive and other effects of the disaster," she said.

Top public health official, John Nkengasong, said on Thursday that he was encouraged by the way that South Africa has handled its latest Covid-19 wave driven by the Omicron variant, adding that severe lockdowns were no longer the best way to contain the virus.

"We are very encouraged with what we saw in South Africa during this period where they look at the data in terms of severity," Nkengasong, director of the Africa Centres for Disease Control and Prevention (Africa CDC)."

The period where we are using severe lockdowns as a tool is over. We should actually be looking at how we use public health and social measures more carefully and in a balanced way as the vaccination increases."

South Africa experienced a steep rise in Covid-19 infections from late November, around the time it alerted the world to Omicron, with new infections peaking in mid-December at an all-time record. However, the government opted not to increase restrictions above an adjusted level 1 lockdown. It subsequently lifted the evening curfew at the end of December.

More in this category: « Acting Chief Justice Raymond Zondo condemns the attack on the Constitutional Court. NSFAS funding application closing date has been extended by two weeks. »
back to top