Post incident-report shows a series of failures behind damage to parliament. 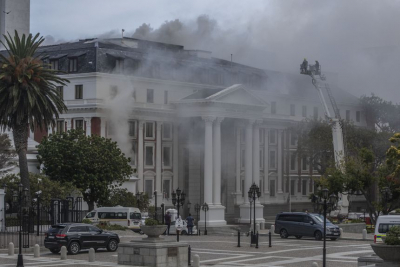 The City of Cape Town’s Fire Department has released a report into the Parliament fire that occurred earlier this week.

The post-incident report was released on Friday by Mayor Geordin Hill-Lewis. He said the city publicly released the report without any additional comment "in the interests of transparency, and following great public interest".

It reflects the observations of professionals, but does not in any way constitute or substitute for a full forensic investigation conducted by professional fire investigators," Hill-Lewis said.

He said the report had been sent to the Speaker of Parliament, Nosiviwe Mapisa-Nqakula.

In its report on Friday, the City Fire Department said the report was for information purposes only and provided the observations of City fire safety officers who had worked on the scene.

"During my walk around of the affected areas I found that the National Assembly sprinkler valve was not serviced. [The] service date was in 2017 and this needs to be done every three years and the valve appeared to be closed.  If properly serviced, this valve should have been locked with a chain in an open position and a block plan would have been available showing [the] system layout. The lifts continued to operate, despite a "break glass" unit at one lift being activated," Station Commander JJ Williams said.

Williams added that the roof smoke activated at the National Assembly.

Divisional Commander Wayne Visser also stated in the report that the emergency staircases were poorly ventilated with minimal natural vents to the outside. No mechanical venting of the staircases was observed.

"It is unclear which apportion of the building was actually fitted out with sprinklers. The required layout block plan at the valve set was illegible," Visser added.

The report also raised concerns about wall panelling and décor materials that contributed to the fire.

The fire was contained after a two-day battle. It was initially declared under control on Monday but flared up again after it was fanned by strong winds.
Read the Full Report here:Parliament post fire assessment report by COT.

More in this category: « NSFAS funding application closing date has been extended by two weeks. ANC distances itself from Ace Magashule's Limpopo visit. »
back to top