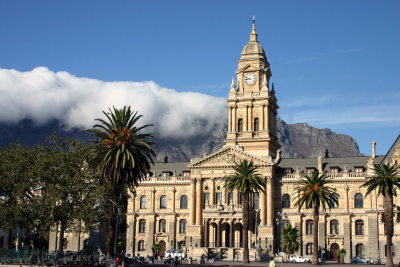 Parliament announced on Friday that this year’s State of the Nation Address (SONA) will now be held at the Cape Town City Hall on 10 February 2022.

According to the statement, the Presiding Officers met this morning to consider various reports on options available for business continuity of Parliament's work, including the hosting of the SONA.

This comes after a fire that started on Sunday engulfed Parliament and was contained after two days.

"Following a sad and devastating week in which fires that started on Sunday and destroyed Parliament's buildings, including the National Assembly and sections of the Old Assembly Chamber, we made a solemn undertaking that, despite the devastation of the disaster, we will not allow a situation where Parliament’s work is derailed or disrupted in any manner," the statement read.

"The extensive damage has necessitated the institution to find an alternative venue off-site to host this important event in the parliamentary calendar and the country."

Parliament described the National Assembly Chamber as a building with great historical significance and rich heritage and representation of evolution from apartheid to democracy.

"It was there that Members of Parliament met to pass laws, take binding decisions, hear important announcements and host the Joint Sittings of the two Houses of Parliament."

The Presiding Officers said they were grateful to the Western Cape Provincial Government and the City of Cape Town, which offered the Cape Town International Convention Centre, the City Council Chambers and the City Hall as alternative venues.

"After a great deal of consideration and following thorough onsite inspections of alternative places, we are pleased to announce that the 2022 SONA will be held at the Cape Town City Hall.

"It is also a befitting place considering its historical significance, which is embedded in the minds and hearts of South Africans."

The Presiding Officers said it is where Nelson Mandela addressed the nation after his release from prison on 11 February 1990.

"Again, on 9 May 1994, the late Archbishop Desmond Tutu introduced Tata Mandela to thousands of jubilant South Africans in the same balcony after his election in the National Assembly as the first democratic President."

The officials said they were looking forward to a successful SONA.

"As South Africans, we are resilient people, we have overcome many difficulties in the past. Therefore, we will rise from these ashes and rebuild, restore, renew and march forward in our continuous endeavour to build a democratic, non-racial, non-sexist, united and prosperous society we all aspire."

More in this category: « ANCYL members protest over accreditation ahead of Peter Mokaba memorial lecture. 2,700 SANDF troops deployed to help police until March 2022. »
back to top