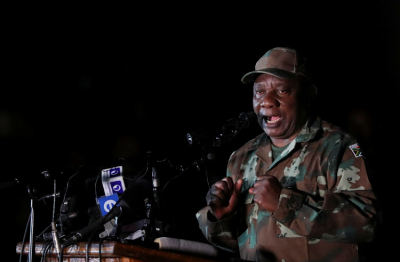 President Cyril Ramaphosa has approved the deployment of 2700 South African Defence Force in corporation with South African Police Service to combat crime and preserve law and order in the country.

Parliament confirmed the employment is done in accordance in Section 201(2) of the constitution of the South Africa in 1996and Section 18 (1) of the Defence Act of 2002.

The expected expenditure to be incurred for this employment amounts to R233 296 240.

Soldiers were deployed to monitor toll roads and toll gates over the festive season.

Meanwhile more than 300 lives were lost in Gauteng and Kwazulu-Natal during the widespread looting that caused a devastating ripple effect on the country's economy.

The N3 was brought to a standstill to protest against the employment of foreign truck drivers and they were obstructing the flow of traffic and defied instructions by police officials to remove their trucks.

The fire engulfed Parliament and it is anticipated that the work by the multidisciplinary team of engineers, which arrived at Parliament to conduct assessment and establish the scale of the damage - amongst others,will proceed.

Also the main entrance to the Constitutional Court was littered with shattered glass following the hammer attack and at least 28 cracks and holes in the glass windows and doors occured to the premises in Braamfontein.

More in this category: « State of the nation address (SONA) moved to Cape Town City Hall after Parliament fire. Matric class of 2021 'lost 50% of school year in Grade 11'. »
back to top