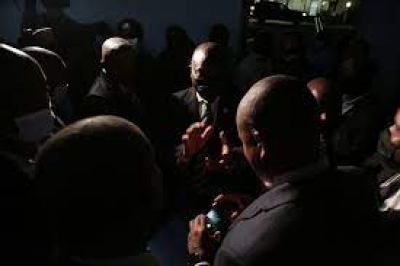 Caption:President Cyril Ramaphosa speaking to a few journalists while leaving the hall after a power outage while he was addressing the Gala Dinner at the Ranch Resort outside Polokwane.

President Cyril Ramaphosa's fundraising gala dinner on Friday ended in darkness as a power cut saw him having to cut his speech short.

Ramaphosa was addressing the dinner at The Ranch Hotel in Polokwane, Limpopo.

The event - used as a fundraising initiative ahead of the party's January 8 statement on Saturday - was attended by various business people hoping to socialise with ANC leaders.

Ramaphosa's presidential bodyguards, who were quietly sitting among the diners, sprung up and surrounded him at the podium when the lights went out.

He had just assured business that economic recovery plans were afoot and that the ANC renewal project was not just a pipe dream. The president had also admitted that the ANC NEC was concerned about security breaches that led to attacks on institutions such as parliament.

Ramaphosa also hinted that an emphasis would this year be placed on building and "renewal" in ANC branches. This would be important for him because it is branch members that will decide the outcome at the party’s year-end conference, and also because his detractors had been concentrating their energies on lobbying local ANC members and trying to swing branches in their favour.

He spoke about the work of the ANC’s women’s, youth and veterans’ leagues, all three of which are important voting lobbies in the party. He also praised the party’s alliance partners,the SA Communist Party and labour federation Cosatu, both of which he will need on-side in the ruling party’s presidential campaign year.

"Ending patronage and corruption in the ANC and broader society is an objective that we are aiming to achieve," he said, adding that members of the movement should be "conscientised" to put the interest of the people first.

"Our work is continuing," he said. "Whilst we have encountered resistance from within our organisation, we will not deviate from our fundamental task of renewing and rebuilding our organisation.

Ramaphosa was allowed to finish his speech with the help of light beams from TV news broadcasters. He later joked about the need to fix the country’s power issues.

Immediately after he left the podium, he went back to his seat. But his security team, apparently as a security measure, escorted him out of the venue.

On the other hand, guests tried to save the day, breaking into song after the power outage but soon ran out of steam after Ramaphosa left the hall for security reasons.

It is not immediately clear what prompted the outage.

After about 15 minutes, the power was restored and the programme continued as expected, but with a bit of a damper.

On Thursday, Ramaphosa left an ANC Women’s League event at the Lebowakgomo Civic Centre just minutes after arriving, ostensibly due to non-compliance to Covid-19 regulations.

Earlier on Friday, a security officer outside the Polokwane Council Chambers where Ramaphosa was due to deliver the Peter Mokaba Memorial Lecture, described a situation of a large group of protesting people dressed in ANC colours at the gate, demanding to be let inside, as "volatile". Only a limited number of people were given accreditation to the venue due to Covid-19 regulations and Ramaphosa eventually addressed them outside from the back of a van.

Minutes later, ANC national chairperson, Gwede Mantashe walked out of the venue and his security whisked him away.

ANC treasurer-general Paul Mashatile is the party's fundraiser and would have been responsible for organising the event. He told the media just minutes after the incident that there was nothing to be embarrassed about.

"How do I get embarrassed by the problem of the venue of other people?" Mashatile said in response to a question. "What must I do? We hired a venue, electricity trips. Why is it a fault of the ANC leadership?" he said.

This is just one of a few incidents that have seemingly embarrassed Ramaphosa, with others seen as security threats.

Mashatile blatatly refused to link the incidents that have occurred around the president in the build up to the January 8 statement.

He explained that security protocols do not allow the president and his deputy to be in a dark room so they had to leave the venue.

More in this category: « Omicron study points to end of acute phase of Covid-19 pandemic. Livestream:January 8 statement I ANC 110th birthday celebrations. »
back to top