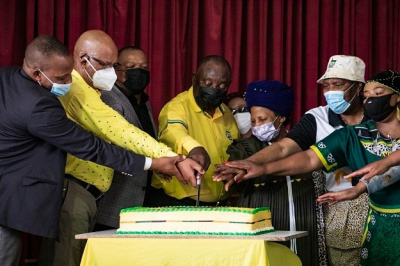 The African National Congress (ANC) National Executive Committee (NEC) has agreed to intensify and accelerate renewal, focusing more energy on implementation of the agreed upon pillars of renewal, which include:  - building ANC branches as agents of change with a membership that respects and is respected by the people.

The party's birthday's rally was held at the Old Peter Mokaba Stadium with President Cyril Ramaphosa delivering the National Executive Statement (also known as the January 8 statement) which are marching orders for the year ahead.

"On this occasion of the 110th anniversary of the formation of the ANC, we need to engage in a frank assessment of how far we have gone during the past year in meeting the core mandate defined by the 54th National Conference," said Ramaphosa.

"In doing so, we need to understand the domestic and global environment in which we operate. There are many developments that characterise this environment and which inform our programme for the year ahead."

Ramaphosa has urged parties members to stop tolerating indiscipline happening within the party.

"We even hear that in ANC meetings, someone stand up and assault a female member of the ANC and we close our eyes and fail to take action. Those who do such have defined themselves outside of the ANC. You must know that once you have done something like that, you are no longer a member of the ANC. If I stand up and slap NEC member Nomvula Mokonyane, I should know that the door is open, I must leave the ANC," Ramaphosa said.

Ramaphosa said the indiscipline was making people distance themselves away from the ANC,wondering what kind of a party tolerates ongoing indiscipline.

"I say we must act on acts of indiscipline. If we can achieve that, we will endear ourselves to our communities, our people will see that we are serious in rebuilding the ANC," he said.

Turning to the party’s project to renew and rebuild itself, Ramaphosa said the NEC took a decision to set up a commission to develop a roadmap towards its 120th birthday in 2032.

The renewal and rebuilding of the governing party will take time and experience successes and some setbacks, Ramaphosa said.

"The aim is to ensure that the ANC Renewal Commission develops proposals that can be operationalised as a matter of urgency. Its work will also be informed by continuous consultation with structures of the ANC, Alliance partners and the broad democratic movement."

The NEC is expected to announce the terms of reference and composition of the commission so it can start its work by the end of this month.

The party's 110th birthday celebration come days after the commission released the first part of its report where Deputy Chief Justice Raymond Zondo asserted that either the ANC and its government simply did not care that state entities were in decline during state capture or they slept on the job - or they simply didn't know what to do.

"Not only was state capture a systematic attempt at siphoning off public resources and funds; it also destroyed the capability of the state and led to the departure of capable people from public institutions as they resist state capture.

"Some were fired, some were forced to resign, some gave up, some were suspended for long periods and they left. Those were the critical skills that our country was robbed off."

Ramaphosa said those perpetrating state capture knew that targeting competent officials in the state would make it easier to achieve their own ends.

"It had the effect of undermining our democratic state and threatening our programme of social and economic transformation," Ramaphosa said.

Despite differing public views from some ANC leaders on the report, Ramaphosa said the party would act on its recommendations.

"The ANC will support government in effecting the measures required to eliminate conditions and conduct that enable state capture and systemic corruption. As the ANC, we will engage with our structures and members to ensure sufficient understanding of the contents and findings of the commission.

In light of recent events where some parts of Parliament burnt down and the Constitutional Court was vandalised, Ramaphosa has vowed that going forward, the ANC will work tooth and nail to defend South Africa's democratic gains against attempts to undermine the country's constitutional order.

More in this category: « Buffalo City Metro on high alert as heavy rains persist. EFF calls on government to lift restrictions on public gatherings. »
back to top