EFF calls on government to lift restrictions on public gatherings. 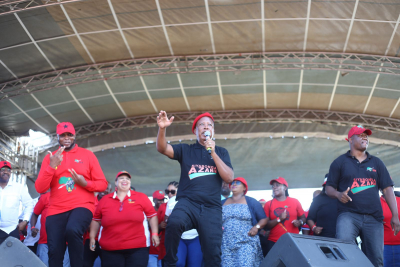 The Economic Freedom Fighters (EFF) appears to be swooping in for the kill in KwaZulu-Natal in an attempt to secure some of the ground lost by the governing party during the recent local government elections.

As a token of appreciation to its supporters who voted for them in last year's local government elections, EFF was hosting a Siyabonga Rally in KwaZulu-Natal on Saturday.

South Africa's third-largest political party secured 150 seats and 8.64% of the vote in the province in the last local government elections which is up from 59 seats and 3.46% in the 2016 election.

The EFF grew its support from a merely 4% to just over 10% in eThekwini after the recent local government elections.

The red berets also managed to have two deputy mayors in Nongoma and Dannhouser local municipalities in the north of the province.

Addressing his supporters, leader Julius Malema called on President Cyril Ramaphosa to lift restrictions on public gatherings, accusing the president of using the regulations to hold on the power.

Referring to the ANC’s birthday celebrations in Polokwane, Malema said the 2000 supporters at the stadium is proof that the doors can be swung open again.

"Ramaphosa must open stadiums. We want to watch soccer at (Moses) Mabhida stadium because if political parties can be in a stadium with 2000 people, why can’t soccer teams be allowed in stadiums?

"We are asking for stadiums to open because entertainment can create a lot of jobs, a lot of people lost jobs because of this unreasonable lockdown regulations," he added.

The EFF also wants to visit the Durban’s Hilton Hotel to establish how many black South Africans are employed at the five-star hotel.

"We will be visiting the hospitality sector, starting with the Durban Hilton, to find out how many South African’s they employed. Don’t hate the foreigners; they didn’t hire themselves," he said.

Malema’s visit to Durban began with a ceremonial slaughtering of cows followed by the EFF Siyabonga rally.

He made all his intentions clear.

Malema took a swipe at eThekweni mayor Mxolisi Kaunda, saying he is not a politician but a 'crook that enters through the backdoor. "Kaunda hates black people, he only went to Indian areas during the July riots."

He warned members that as the EFF gains popularity and takes over government structures, bribes from the private sector will always be a temptation.

More in this category: « ANC pledges to intensify and accelerate 'painful' renewal process. ANC forges ahead with the vaccine mandate in South Africa. »
back to top