Parliamentary staff not expected to return to work at the precinct after the fire. 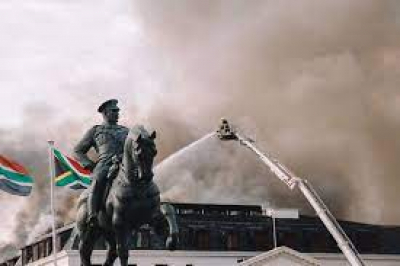 Parliament has confirmed that Parliamentary staff are not expected to work at the precinct after a fire gutted it last week Sunday.

In a statement released on Sunday, Parliament's spokesperson Moloto Mothapo said it had noted Nehawu's instruction to its members.

"Parliament wishes to state that, on 2 January 2022, the accounting officer of Parliament issued a communication to members of staff, informing them of restriction of access to the precincts of Parliament due to the fire incident, which has resulted in the cordoning off of affected buildings for reasons relating to safety, the investigation by law enforcement agencies and assessment by the Department of Public Works and Infrastructure's multidisciplinary team of engineers," the statement said.

"Due to these restrictions, the physical presence of most staff members, with the exception of the management directly responsible for the management of the fire incident, is not expected until further notice."

Nehawu which organises staff of Parliament, said it’s been caught off guard by Parliament’s accusation on Sunday that it instructed members not to report for duty at the precinct.

Parliament’s Sunday statement "noted a public statement by Nehawu, instructing members not to report to the precincts due to the recent fires."

Parliament went on to accuse the union of making "unhelpful public exchanges."

"We didn’t send out any communication to members," said Nehawu spokesperson Lwazi Nkolonzi.

On Friday, the City of Cape Town fire department released its post-incident report into the blaze, which said that the National Assembly sprinkler valve was not serviced since 2017 and was closed at the time of the fire and that the fire doors were latched open, which assisted in the spread of the fire.

Parliament reiterated that the report only contained preliminary observations of the firefighters during the course of their work.

"It neither purport to provide conclusive findings and evidence regarding the cause and the circumstances surrounding the fire incident nor provides an assessment of the safety of the other parliamentary buildings not affected by the fire."