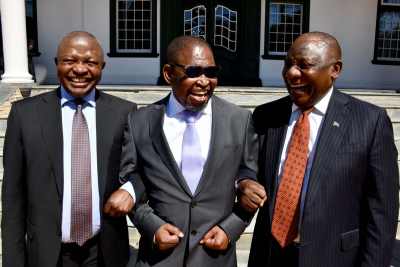 Of most relevance for the economic outlook was the ANC’s view of a 'clear need for some form of income support for unemployed and poor South Africans', the Bureau for Economic Research (BER) said in a research note on Monday (10 January).

"This supports our baseline view that the R350 per month social relief of distress (SRD) grant will be extended beyond March 2022 when it is set to end," the group said.

Social development minister Lindiwe Zulu has indicated that a new basic income grant in South Africa will likely be phased in over several years, with her department currently pushing for an extension of the R350 Social Relief of Distress (SRD) grant as a baseline.

Zulu was responding in a written parliamentary Q&A in which she was asked about the government’s plans to introduce a basic income grant for adults between the ages of 18 -59.

The social development minister said she is of the view that the R350 SRD grant will provide a basis to introduce the Basic Income Grant, but that an amendment of existing legislation is required to formally introduce the new scheme.

Depending on costs and the fiscal position of the country, it may take a few years to progressively implement. Until then, the department is, however, currently motivating for the extension of the Special Covid-19 SRD Grant, preferably over the medium-term period," she said.

Ramaphosa said that the ruling party also plans to move forward on its plans to introduce land expropriation without compensation in 2022.

This, despite the party failing in late 2021 to secure the necessary Parliamentary votes from opposition parties to amend section 25 of the Constitution,the BER said.

"The land reform process that we need to embark upon will promote economic development for the benefit of all. The ANC will implement its resolution on the expropriation of land without compensation despite the refusal of other parties in Parliament," he said.

The ANC scrapped plans to change the constitution to make it easier for the state to take land without paying for it after failing to secure sufficient backing from the opposition and will now resort to using regular legislation to facilitate the process.

"Changing the constitution was just one instrument we could have used," justice minister Ronald Lamola said in December. "The matter is now ended. We will now use our simple majority to pass laws that will allow for expropriation without compensation."

More in this category: « Basic Education publish list of new subjects to be implemented in schools. SAA's board commits to implement recommendations of state capture report. »
back to top