Geotechnical specialists called in as left lane of N1 South closed due to sinkhole. 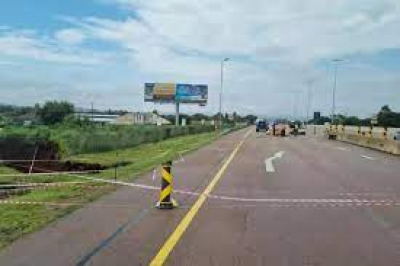 The left lane of the N1 south, just before Botha Avenue in Centurion, Gauteng, was closed on Monday morning after a sinkhole developed on the road reserve at the Flying Saucer Interchange.

The South African National Roads Agency (Sanral) said it had sent a team of engineers and the Routine Road Maintenance contractors to assess the situation and map out a plan of action.

"We have also called in the expertise of geotechnical specialists to assist with the assessment," said Progress Hlahla, Sanral northern region manager.

At this stage, it is unclear what may have caused the sinkhole. However, it emerged following recent heavy rainfall in Gauteng.

The concern is that the road is already showing signs that it will collapse.

There are several deep cracks in the tar which indicate the ground is waterlogged.

Motorists are urged to exercise caution.

In a separate incident, a Toyota Avanza was also swept away at a water bridge in Olievenhoutbosch. However, occupants in both incidents escaped unharmed.

More in this category: « Government plans to introduce changes to its borders in 2022. EC Premier Oscar Mabuyane calls on businesses to assist flood victims. »
back to top