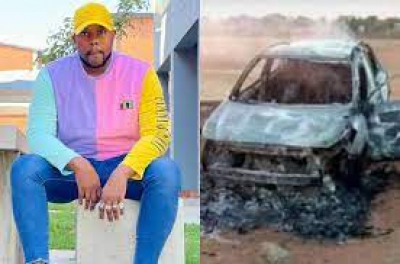 Sam Mbatha who’s car was found burnt out in Klipgat. A body burned beyond recognition was found in the boot. Photo: Facebook/SAPS.

Police in the North West says DNA results have confirmed the body of a male which was found inside the boot of a burnt out car in Klipgat outside Pretoria is that of missing Sam Mbatha.

Officers were called to the scene when the car, which belonged to Mbatha, was found on a soccer field in the Ikageng section in June last year.

Police said initial investigations led to a house where a search revealed blood stains in one of the rooms and an axe believed to have been used in the murder on the roof.

North West police spokesperson Adele Myburgh said four men had since been arrested in connection with the murder and would appear in the Ga-Rankuwa Magistrates Court next Tuesday.

After the car was found burnt, Myburgh said initial investigations led police to a house in Phutha Section on 21 June.

"The house was searched, and in one of the bedrooms, the team found bloodstains on the floor, under and on top of a bed as well as on the carpet."

Myburgh further added that an axe suspected to have been used during the commission of the crime was found on top of the roof of the house. The gruesome discovery later led to the arrest of four suspects: Arthur Khoza, 19,  Thato Masetla, 22, Junior Modise, 21, and Mahlatsi Nkuna,21.

They are due back in the Ga-Rankuwa Magistrate's Court on 18 January on a charge of murder.

Mamba Online reported last August that Mbatha was one of 18 LGBTIQ+ people murdered in South Africa since 12 February 2020.

More in this category: « Queen Sibongile's bid to inherit half of late king's estate to be decided tomorrow. Angie Motshekga pleased that learners are back at inland schools. »
back to top