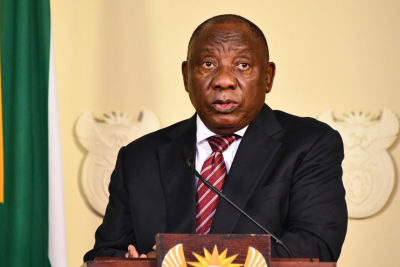 President Cyril Ramaphosa says acts of terrorism and violent extremism that have led to loss of lives, property and displacement of people, especially women and children, cannot be allowed to continue without a proportionate response.

The President was delivering opening remarks at the Southern African Development Community (SADC) Extraordinary Organ Troika Summit, held together with Personnel Contributing Countries plus the Republic of Mozambique on Tuesday, in Malawi.

Ramaphosa is convening the summit in his capacity as Chair of the SADC Organ on Politics, Defence and Security Cooperation.

The summit is meant to review progress of the SADC Mission in Mozambique (SAMIM), which was deployed by SADC until 15 January 2022, to support Mozambique to combat terrorism and acts of violent extremism in the Cabo Delgado Province.

"Since the deployment of SAMIM in Mozambique, significant progress has been made. The security situation in Cabo Delgado is improving, which has allowed for some internally displaced persons to return to their homes and resume their normal lives," Ramaphosa said.

He said that efforts of the Mission, working in collaboration with the Mozambican Defence Force, has created safe passage to facilitate the provision of humanitarian assistance to the population affected by terrorist activities.

"I wish to express appreciation and commend the work of SAMIM on the ground. I equally appreciate and commend Member States who have supported this work financially and through the deployment of personnel and equipment," he said.

The President noted that while there were gains by the missions, there have also been challenges. He said they were saddened by the casualties suffered by SAMIM and the Mozambican Defence Force.

"I wish to extend our deepest condolences to the Governments of Botswana, Lesotho, Mozambique, the United Republic of Tanzania, and my Government, South Africa, for the demise of our brave sons, who were lost in the line of duty.

"SADC will forever cherish their service and contribution to peace and security in the region. We also extend our best wishes for the speedy recovery of those who were wounded in action," he said.

Ramaphosa emphasised that terrorism cannot be permitted to continue to thrive in any part of our region as its presence will reverse the stability and progress SADC has achieved in its four decades of existence.

"As we consider the agenda before us, we are cognisant of the magnitude of ground that still needs to be covered in the work of SAMIM. Therefore, we cannot let our guard down.

"Our meeting must indicate a strengthened commitment to defeat and uproot terrorism from our region," he said.

Today, the President will participate in the SADC Extraordinary Summit of Heads of State and Government.

More in this category: « Livestream:AmaZulu Royal Family court case continues. Kleinmond blaze has been contained, firefighters commended. »
back to top