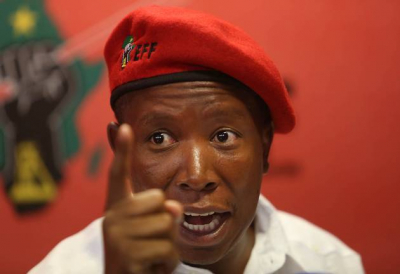 EFF leader Julius Malema has apologised to President Cyril Ramaphosa for claiming during the SONA debate that he had abused his late wife.

In a statement released this evening Malema said he had wanted to offer the apology in parliament but he was "drowned out" and had his mic switched off before he could relay the message to Ramaphosa.

Malema said his utterances were a desperate act of personal defence, which he regretted.

This comes after Ramaphosa earlier in parliament, when he was responding to a two-day debate of his State of the Nation Address, offered Malema and his wife Mantoa an apology over abuse allegations which were leveled against him by his friend-turned-foe ANC MP Boy Mamabolo.

“Today, following President Ramaphosa’s apology to my wife and family, I stood in parliament to return the same hand to him, his departed wife, Nomazizi and his entire family. I was, however, drowned down by ruling party benches without any protection from presiding officers,” Malema said.

"I hope the president can accept my apology, together with his family, which I offer sincerely.

"I also hope that such a degeneration never occurs again where ANC MPs use personal matters, masquerading in false and malicious accusations to score political points.

"I also would like to apologise to all South Africans who were offended in the process, in particular victims of gender-­based violence.

"In conclusion, I would like to mention that I have personally communicated my apology directly to President Ramaphosa in a phone call. I, therefore, hope that this puts the matter behind both of us."

Tweet
More in this category: « Mo Shaik says his resignation as a special advisor to Minister Lindiwe Sisulu is simply a "technical" move. A 14 -year-old Freedom Park Secondary School learner stabbed to death. »
back to top