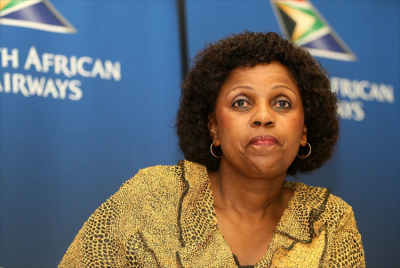 Former South African Airways chair Dudu Myeni made her first appearance in the dock of the Johannesburg Magistrate’s Court on Tuesday, on charges of defeating the administration of justice.

In the indictment presented in court, the State alleges Myeni is guilty of the crime of defeating or obstructing the administration of justice, read with Section 256 of the Criminal Procedure Act 51 of 1977.

The State says that on November 5, 2020, near Johannesburg in the regional division of Gauteng, Myeni did, unlawfully and with the intent to defeat or obstruct the administration of justice, at the hearing of the Commission, disclose the identity and/or name of a witness that the Chairperson (Justice Raymond Zondo) had ordered should not be disclosed or published and that the witness was to be referred to as Mr X during his evidence to the Commission and after his evidence insofar as the Commission was concerned, which act defeated or obstructed the administration of justice.

In an alternative charge, the State alleges that Myeni is guilty of the crime of contravening the provisions of Regulations 9 and 12 of the Regulations of the Judicial Commission of Inquiry into Allegations of State Capture, Corruption and Fraud in the Public Sector, including organs of State, published in the government gazette on 9 February 2018.

Now, 16 months later, Myeni has officially been charged with defeating the administration of justice, or alternatively either contravening the act or the regulations.

She was served with a summons to appear in court early this month and appeared briefly this morning.

The case was postponed to May for the state to consider various representations made by Myeni’s legal team earlier this week.

Myeni could face more criminal charges soon, after trade union Solidarity announced on Monday it would be laying charges against her and 19 other people allegedly involved in state capture.

More in this category: « Zandile Gumede and co-accused' corruption case set down for trial in July. Prince Simakade to launch a court bid to set aside recognition of Misuzulu as King . »
back to top