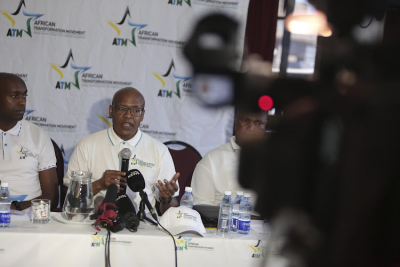 President Cyril Ramaphosa will face his first motion of no confidence on Wednesday and it will be voted on by open ballot.

On Tuesday, National Assembly Speaker Nosiviwe Mapisa-Nqakula indicated that she declined the ATM's request to postpone its motion.

The ATM wanted the motion postponed pending the outcome of a high court challenge to the speaker’s decision to have the motion conducted by open ballot.

The party wrote an urgent letter to Mapisa-Nqakula after it was told by the court that it was impossible for the judge to hear arguments within 48 hours prior to the National Assembly’s scheduled debate.

"The ATM will enroll the secret ballot case in a normal court roll because the judge said it is impossible for her… to be in time for the debate that is scheduled for Wednesday the 30th of March, The ATM will henceforth write a letter to the speaker of the national assembly requesting her to postpone the debate on no-confidence motion in Ramaphosa, until the court has heard the matter," ATM Spokesperson Zama Ntshona said.

Mapisa-Nqakula, however, advised the ATM that, as the power to postpone items on the agenda of the Assembly resided with the National Assembly Programming Committee, she could not unilaterally accede to their request.

She referred the ATM to Rule 90, that provides, among others, that no member may anticipate the discussion of a matter appearing on an order paper or agreed upon by the Programme Committee for scheduling.

The chances that either motion would get the required votes to pass are slim and the sitting is scheduled to start at 14:00.