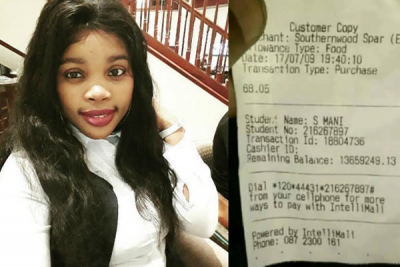 She was only entitled to a R1 400 food allowance and was accused of failing to report when R14 million was credited to her account erroneously. She instead embarked on a spending spree.

After serving one third of the five-year sentence, she will be eligible for parole and could finish the rest of the five years under correctional supervision.

In handing down the sentence on Wednesday, Olivier said the court was of the view that a suspended sentence was totally inappropriate.

"The only sentence that is appropriate is direct imprisonment, and you are therefore sentenced to a term of five years' imprisonment."

Olivier said the court considered the fact that Mani was a first-time offender.

Olivier said 585 students who relied on NSFAS funds to study at WSU would have been prejudiced if IntelliMali, a Cape Town-based company responsible for distributing NSFAS funds to students, had not paid back the money she used to WSU.

She also noted the money was "not spent on essential items to stay alive. It was inspired by greed not need".

The court considered Mani's age and health, and Magistrate Olivier stated that Mani was an adult when she committed the crime.

The court dismissed Mani's version that she had no intention of depriving NSFAS of its money and had no knowledge of the specification of the loan agreement she had with NSFAS.

Mani was arrested in May 2018 by the Serious Commercial Crime Unit of the Hawks after IntelliMali opened a case of theft.

More in this category: « Livestream: Motions of no confidence in Ramaphosa and Cabinet. PSC express concern over the continued referral of grievances. »
back to top