Government has no plans to introduce a mandatory vaccine policy| Mabuza. 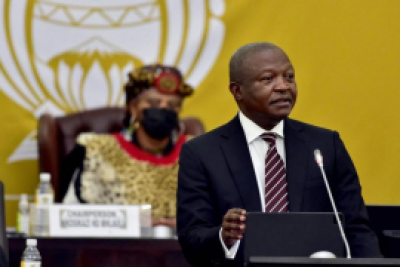 "One thing we are not going to do is force people to go and vaccinate," Mabuza said in response to oral questions in parliament.

"We think (that) would be crossing the 'red line'. All we can do is encourage our people to go and vaccinate."

Mabuza added that the government instead plans to ‘persuade’ citizens to see the benefits of taking the vaccine through various incentives, including ongoing restrictions around gatherings that limit unvaccinated people to 1,000 people indoors and 2,500 people outdoors.

While no South Africans will be blocked from essential services, it is hoped that more people will vaccinate to gain access to sports and other events.

The deputy president confirmed that the government was still planning to lift its national state of disaster and most lockdown restrictions, despite the likelihood of a fifth Covid wave in the coming weeks.

He added that the fifth Covid wave is expected to be less severe than other waves, with the country expected to have a ‘base’ of vaccinated people which will protect it from the devastation seen in prior waves.

While no government mandate will be introduced, planned regulations will still allow private groups to introduce their own mandates.

Discovery, the owner of South Africa’s largest health-insurance administrator, and other firms have already made it compulsory for their workers to be vaccinated and seen an uptake of the shots surge as a result.

Scientists advising the government have said they expect a fifth wave of infections to hit at the end of May 2022.

South Africa’s official death toll from the coronavirus passed the 100,000 mark on Wednesday, a week after the country relaxed almost all restrictions in response to a decline in new infections.

An additional 44 deaths from the disease have been reported, bringing the total to 100,020, the National Institute of Communicable Diseases said in a statement.