Cyril Ramaphosa warns instigators behind July unrest they will face the law. 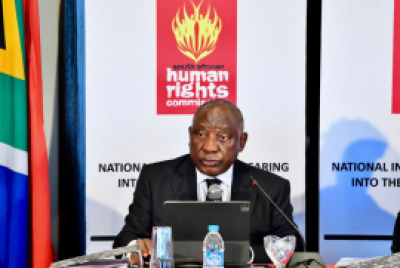 President Cyril Ramaphosa says the country "stared into the heart of darkness" during the height of the July 2021 unrest.

Ramaphosa was giving his opening statement at the South African Human Rights Commission’s (SAHRC) National Investigative Hearing into the July 2021 unrest that unfolded in KwaZulu-Natal and Gauteng provinces.

"We saw scenes of homes being ransacked and destroyed, and shops, businesses and warehouses being looted and torched, and of people being beaten and humiliated. We felt uncertain and fearful for ourselves, our loved ones, and for our country.

"For one week and one day in July 2021, we stared into the heart of darkness. We watched in horror as parts of Kwa-Zulu Natal and Gauteng were engulfed in violence, looting and destruction, "Ramaphosa said on Friday.

Ramaphosa said he was firm in calling for action on those behind the riots, and the country could not tolerate what happened.

He added that the country is still counting the economic costs of the unrest with at least R50 billion "wiped off" the economy and at least two million jobs lost or impacted as a result of the looting and destruction of businesses.

"The chaos was used as a smokescreen to carry out acts of economic sabotage like attacks on commercial trucks carrying goods, the raiding and torching of shopping malls, factories and warehouses, and the blocking of roads and highways vital to economic activity.

"That economic infrastructure was targeted in the manner that it was, shows clearly that the intention was to bring our economy to its knees and thereby destabilise our democracy."

He added, however, that despite the devastation, South Africa stood up against those who carried out and instigated the unrest.

"We have heard from media monitoring and data analysis agencies in these hearings how instigators led well-orchestrated campaigns on social media to inflame racial tensions, spread fake news and disseminate misinformation.

"But try as they might, they did not turn us against each other. To the contrary, South Africans came together as never before.

"As has been the case so many times in the past, the people of South Africa showed that they love their country dearly, and will always stand united against threats to its security," the President said.

Ramaphosa added that "we are not a failed state, yet, and we will not get there. We are not a failing state, because we are rebuilding the capacity of the state. We are taking steps every day to rebuild that capacity - and we admit that we lost state capacity along the way, and it's like turning the Titanic around. It does not happen in one day. It takes time."

Causes of the unrest

Ramaphosa said although socio-economic factors played a role in the cause of the unrest, criminal elements likely aggravated the discontent.

"The socio-economic conditions in the country played a role in the causes of the unrest. This could explain why so many ordinary South Africans would participate in the looting risking arrest, injury and, in some cases, death. [However,] the fundamental cause of this unrest was a deliberate decision by certain individuals to instigate, coordinate and incite widespread destruction of property, violence and looting.

"They were likely criminal elements stoking the flames, in the seemingly well-organised targeting of factories and warehouses but also in the violence that broke out between certain communities in Kwa-Zulu Natal, "he said.

Ramaphosa reiterated to the commission government’s long held acknowledgement that it was "poorly prepared for an orchestrated campaign of public violence, destruction and sabotage".

"What this country experienced was not a popular uprising of the poor, as the peddlers of misinformation sought to characterise it at the time. It was not the bubbling over of discontent over an allegedly legitimate political grievance. It was an attempted insurrection.

"While there had been intelligence reports about the possibility of instability, neither the security services nor the government more broadly anticipated the nature, extent or ferocity of those events. This was a failing that we acknowledge, and which we are hard at work to address," he said.

The President explained that as a result of government’s failure to react adequately to the unrest, certain measures are being taken to bolster and strengthen the Justice, Crime Prevention and Security (JCPS) Cluster.

"We have begun the process of filling vacancies in the State Security Agency (SSA). We will be promulgating regulations that will require the intelligence structures to provide intelligence to the National Intelligence Coordination Committee (NICOC), so that intelligence is shared and used, properly and timeously, by relevant structures.

"We will be ensuring that the NSC [National Security Council] meets at least every two months without fail," he said.

"The staffing and training of the public order policing unit will be brought to the appropriate level. The national Minister of Police [Bheki Cele], as well as the SAPS will be required to submit an updated report of the status and functionality of community policing forums to the NSC at its next meeting.

Yesterday, the 31st of March 2022, I announced the appointment of a new National Commissioner of Police to bring stability to the South African Police Service," he said.

Ramaphosa said furthermore, a new Director-General for the SSA has been appointed in order to stabilise intelligence services and regular intelligence briefings for the president and provincial premiers have been re-established.

The President emphasised that government is determined to address the shortcomings that made it unable to deal with an unrest of that scale in the name of those who suffered as a result.

"We must take action on the lessons that have been learned by strengthening the capacity of our law-enforcement and other agencies to deal with any acts of this nature. We have already taken steps to do so, and further actions will follow.

"This is what the South African people deserve. This is what those who lost their lives in the tragic events of July 2021 deserve, "Ramaphosa said.

More in this category: « Livestream: DA Leader John Steenhuisen briefs the media on the failed motion. Bathabile Dlamini sentenced to four years in prison or R200,000 fine. »
back to top