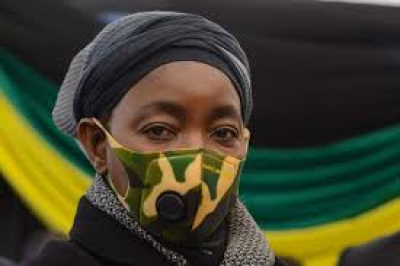 ANC Women's League President and NEC member, Bathabile Dlamini, was sentenced to four years imprisonment or a fine of R200,000 after she was convicted of perjury.

Judge Betty Khumalo handed the sentence down on Friday at the Johannesburg Magistrate Court in Gauteng.

The accused is accordingly sentenced to the fine of R200,000 or four years imprisonment. Half of the sentence is suspended for a period of five years on condition that the accused is not convicted of the offence of perjury and Section 38 of the Superior Court Act 10 of 2013," the Judge said.

Dlamini, 59, was found guilty of perjury for lying under oath during the Ngoepe inquiry into a Sassa grant scandal in 2017.

One of the issues investigated by the inquiry, headed by retired Gauteng judge president Bernard Ngoepe, was whether Dlamini had appointed work streams of the SA Social Security Agency (Sassa) to ensure the agency could take over the payment of social grants from Cash Paymaster Services.

The ConCourt said the inquiry found Dlamini appointed individuals to lead the parallel work streams and those individuals reported to her. The work streams were supposed to report to the Sassa executive committee, not to the minister.

The perjury charge will mark the second conviction of the ANCWL leader after her fraud charges linked to the Parliament Travel Gate scam.

Dlamini's lawyer negotiated with the court after the sentence was handed down, leading to an agreement that she would pay R20,000 on Friday, with the balance — R80,000 — by April 29.

Judge Khumalo was scathing about her conduct, saying she showed no remorse for her actions. She had taken an oath when she became a minister, which she broke, and caused the events that led to the 2017 social grants crisis.

The ANC has kicked the can further down the road in an attempt to delay the inevitable after its national executive committee (NEC), which met this past weekend, instructed its top officials to further discuss when and how Dlamini must step aside.

Dlamini will become the third ANC national leader to be affected by the contentious resolution, adopted at the party's 2017 national conference. The other two are secretary general Ace Magashule and Bongani Bongo, former chair of parliament’s home affairs portfolio committee.

More in this category: « Cyril Ramaphosa warns instigators behind July unrest they will face the law. SAHRC hears government is prioritising the development of a national security strategy. »
back to top