SAHRC hears government is prioritising the development of a national security strategy. 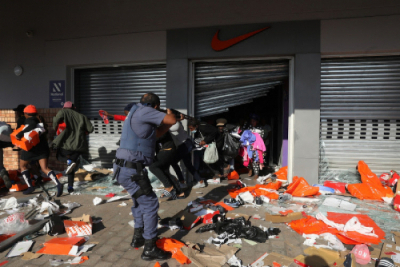 President Cyril Ramaphosa says the country needs to rethink the role of private security in the country, particularly as this relates to support to the South African Police Service (SAPS).

Ramaphosa was speaking at a South African Human Rights Commission hearing on Friday (1 April) on his responses to the mass riots seen in KwaZulu-Natal and Gauteng in July 2021.

The president noted that the country's private security industry played a significant role in controlling the riots and that government was now prioritising the development of a 'National Security Strategy' which would see private security personnel more closely aligned to national strategies around crime.

This follows recommendations made by a panel of experts following the riots, colloquially known as the ‘Africa report’, which found that Ramaphosa should draw up a security strategy, in an open manner that involves all sectors of society.

This strategy should be debated and agreed to in Parliament and should be reviewed at three-year intervals, or when circumstances require, the experts said.

The Africa report found that South Africa’s private security sector played an outsized role in the July riots, with the SAPS not able to effectively respond to the violence.

It noted that South African Police Service accounts a mere 180,000 for a population of some 60 million people, which has fuelled demand for privatised security services across the country.

"The industry is subject to national regulation in terms of the Private Security Industry Regulation Act. It is well resourced – some argued over-resourced – but under-regulated and therefore there is inadequate oversight of how its members conduct their business."

Whilst the official figures put the number of private security officers at well over half a million, industry regulator PSIRA says the real figures are much higher than that.

"Unchecked, this could be seen as a potential risk to stability. However, PSIRA thinks that this could be turned into an opportunity, if these trained officers could be harnessed to assist the SAPS to uphold the rule of law.

"Much more thinking would need to be done about the viability of the idea. What is undeniable is that such an initiative would have to be subject to strict state supervision, probably by the formal security structures," the experts said.

Gauteng premier David Makhura in particular raised concerns about a lack of intelligence from the government’s state security structures and indicated that leaders in the province had to rely extensively on the private security sector for information.

"Realising this apparent incapacity of the state to deal with these challenges, many middle-class South Africans have resorted to hiring private security companies to guard their homes and businesses.

"Private security companies are also relied upon by government to protect government buildings and infrastructure as it does not have sufficient personnel in the SAPS to address all its physical security needs," the experts said.

More in this category: « Bathabile Dlamini sentenced to four years in prison or R200,000 fine. Home Affairs services offline nationwide due 'cable breakage'. »
back to top