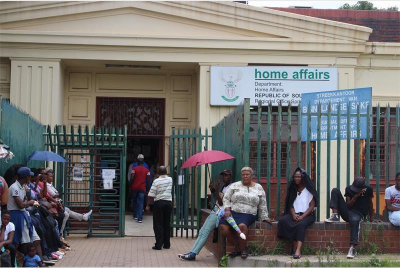 The Department of Home Affairs says that its systems are offline nationwide, impacting almost all services offered through its offices.

In a statement on Friday (1 April), the department said the 'unfortunate incident' was caused by a cable breakage that connects to the State Information Technology Agency (SITA).

The department said that the following services are still available:

"We are waiting for SITA to give us information on the estimated time of restoration of the system. We apologise for the inconvenience caused by this unfortunate network failure."

System downtime is a constant source of frustration for South Africans who are required to use Home Affairs offices for documentation purposes, with it not unusual to spend two hours or more to complete simple tasks such as applying for a passport.

Responding in recent a written parliamentary Q&A session, Home Affairs minister Aaron Motsoaledi said the downtime percentage for the 2020 – 21 financial year was 1.26%, with the downtime primarily related to cable theft.

Data provided by the minister shows the Kensington branch in KwaZulu-Natal, the Grove Mall in Gauteng and Galeshewe in the Northern Cape were some of the biggest downtime offenders over the last year.

By comparison, the downtime percentage between April 2021 and February 2022 period was closer to 5% (4.39%), primarily as a result of load shedding at some offices without generators.

Motsoaledi said that over this period the branches which were the biggest offenders included Mount Frere and Engcobo in the Eastern Cape, and Ganyesa in the North West.

The minister added that the department never closes its offices due to system downtimes and continued to render services that are not system-dependent such as births, marriages and deaths certificates.

More in this category: « SAHRC hears government is prioritising the development of a national security strategy. Masemola| 'We need to 'interrogate relevance & efficacy' of current methods. »
back to top