Masemola| 'We need to 'interrogate relevance & efficacy' of current methods. 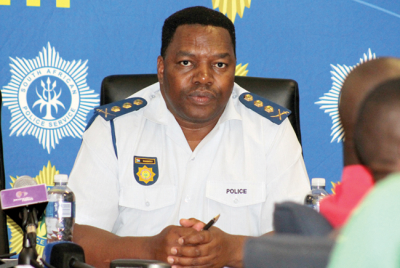 New National Police Commissioner, General Fannie Masemola, has outlined his vision and priorities for the next five years in the position.

Addressing reporters on Friday, Masemola said he assumed the leadership role during a challenging time where public trust and confidence in the police was low.

He said: "The immediate demand for my priority attention is on: the need to build and strengthen community-police relations and subsequently change the prevailing negative public perception; as well as the need to work on both the morale and the integrity of our members who ultimately have a constitutional duty to serve and to protect our communities."

During his tenure, he said he would mainly focus his energies towards a list of priorities.

These included issues of police safety, the DNA backlog at the South African Police Service (SAPS) Forensic Science Laboratories, as well as the Central Firearm Registry.

This, he said, would ensure police enhance service offering to victims of gender-based violence and femicide.

He said the issue of the filling of critical vacancies in environments such as Crime Intelligence and the Directorate for Priority Crime Investigation (DPCI), would also enjoy priority attention.

"Top of the agenda will also be the advanced and refresher training of members as we embrace international policing standards. This is over and above the entry-level training such as the one that will commence soon for the 12 000 new recruits.

"Another concern is the issue of damage to critical infrastructure and extortion at construction sites as the President [Cyril Ramamphosa] mentioned during the State of the Nation Address and many other times. A dedicated capacity has already been established in this regard and we will be dealing decisively with crimes in relation to critical Infrastructure and illicit mining. We will also intensify our efforts to reduce the prevalence of Cash-In-Transit Heists and other aggravated crimes."

In order for the SAPS to be able to respond effectively to the need for more boots on the ground, Masemola said police on Friday saw the arrival of the first batch of trainees (about 10 000 of the ultimate 12 000) at different police academies across the country.

He said: "We see this latest recruitment drive as ground-breaking because for the first time in the history of the SAPS, we will be recruiting more than double the usual threshold of around 5 000.

The Commissioner said the recruits had been subjected to a rigorous selection and screening process.

The training and development programme had also been designed to "ensure that the recruits undergo category-appropriate, Safety and Security Sector Education and Training Authority (SASSETA) accredited training. Training standards will not be compromised."

On completion of the programme in December, the trainees would then be deployed.

Frontline desks at stations; the Public Order Police; Highway Patrol; and Specialised Units would be prioritised, he said.

He said crime-fighting efforts would only yield positive results if all stakeholders formed collaborations.

"Departments outside of the Justice, Crime Prevention and Security (JCPS) Cluster need to come to the party and realise that failure on their part to deliver services, puts strain on the already stretched security forces, and projects South Africa as a lawless country amidst these violent service delivery protests," he said.

Masemola added that the SAPS needed to "interrogate the relevance and efficacy" of its current methods, processes and systems as the world evolves.

"[We should] ask ourselves whether or not what was developed over 30 years ago would make sense to a 21-year-old constable.

Welcoming Masemola, Cele said he was quite confident that Masemola was "fit for purpose and capable to lead" the SAPS.

"We must again thank the President for the speed at which he appointed the Commissioner and not allowing for a vacuum to exist in this critical post."

He said Masemola led the SAPS in a productive Portfolio Committee on Police meeting where he was introduced as the new National Commissioner and was warmly welcomed by parliamentarians.