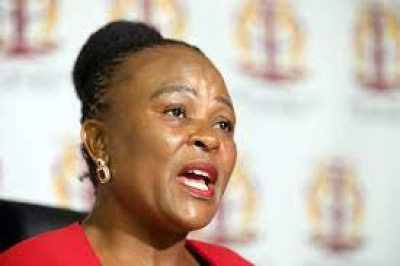 Public Protector Busisiwe Mkhwebane has lodged a court application for an interdict to force National Assembly Speaker Nosiviwe Mapisa-Nqakula to halt her impeachment and prevent President Cyril Ramaphosa from suspending her.

In part A of her application, Mkhwebane wants a court order forcing Mapisa-Nqakula to halt the impeachment process as well as preventing Ramaphosa from suspending her.

The Public Protector also wants Mapisa-Nqakula to withdraw the letter she wrote to Ramaphosa.

The Speaker informed the president in the letter that Parliament’s Ad Hoc Committee on the Section 194 Inquiry would proceed with the impeachment.

In part B, Mkhwebane wants Mapisa-Nqakula’s decision to send the letter declared "unconstitutional" and "invalid".

Mkhwebane has argued that Ramaphosa’s decision to initiate the process of her suspension process was "irrational".

Ramaphosa on 17 March wrote to Mkhwebane asked her to explain why he should not suspend her during the inquiry into her fitness to hold office, and gave her 10 days to respond.

Furthermore, she has pointed out that the Section 194 contravened the Constitution by deciding to proceed with the impeachment while the matter is sub judice.

Mkhwebane has asked the court to order Ramaphosa and Mapisa-Nqakula to pay the cost of her application "in an event of opposition" as well as pay personal cost of her counsel.

The interdict application could be heard in court on 25 April.

Last month, Mkhwebane approached the Constitutional Court (ConCourt) with a rescission application, seeking an order for the apex court to reverse its own ruling.

The ConCourt in February had given Section 194 committee green-light to proceed the impeachment.

The Public Protector wants the impeachment process suspended until the rescission is finalised.

Parliament spokesperson Moloto Mothapo said the Speaker was not a party to any agreement claimed by Mkhwebane's lawyers.

More in this category: « Masemola| 'We need to 'interrogate relevance & efficacy' of current methods. Application to interdict the ANC MP elective conference dismissed. »
back to top