It's a two-man race for MP ANC chair as results are about to be announced. 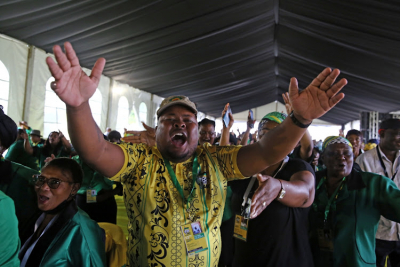 Members of the ANC in Mpumalanga convened at Witbank Dam in Emalahleni to elect a new leadership of the province, in their 13th conference. Photo Credit: Thapelo Morebudi.

Mpumalanga ANC convenor Mandla Ndlovu and former provincial secretary Lucky Ndinisa have emerged as the main contenders for the position of provincial chairperson.

Both of them accepted their nominations after they were nominated by the 700 delegates at the 13th elective provincial conference at the Witbank Dam, Emalahleni in the early hours of Saturday morning, as voting is completed.

Ndlovu, a former protege of Deputy President David Mabuza, got the nod from 160 of the 318 ANC branches in Mpumalanga. He is believed to have switched political allegiance to President Cyril Ramaphosa’s CR22 faction.

Ndinisa, who served as provincial secretary when Mabuza was Mpumalanga ANC chairperson, was nominated from the floor by 222 delegates. He is thought to have joined forces with Mabuza’s faction in the province.

Mtsweni-Tsipane threw in the towel and withdrew from the race before nominations started, apparently after realising she did not have enough support to make it to the ballot. Nyoni failed to make the threshold for nomination.

The contest for the treasurer’s position is between murder accused and former Agriculture MEC Mandla Msibi and former MEC for Sports Arts and Culture, Norah Mahlangu.

Msibi accepted nomination through a letter because he was forced to step aside from participating in ANC activities pending the outcome of his court case.

He is facing charges of murder and attempted murder following a shooting incident at a Mbombela shisanyama in August last year. Former Mpumalanga ANC spokesperson, Sasekani Manzini declined nomination from the floor for both the secretary and deputy secretary positions.

It was last held in December 2015, and no elections were organised when the PEC’s term expired in 2019.

More in this category: « Rahima Moosa concede patients forced to sleep on chairs due to a shortage of space. Mandla Ndlovu elected Mpumalanga ANC chairperson. »
back to top