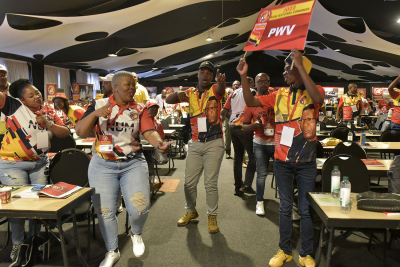 The National Union of Mineworkers (NUM) on Friday ended its three-day 17th national congress, with delegates electing a new leadership led by Daniel Balepile from the Rustenburg region.

Balepile ousted the union's president Joseph Montisetse by seven votes. He was voted by 336 delegates while 329 backed Montisetse.

The acting general secretary William Mabapa was elected permanently to the position at its national congress.

His deputy will be outgoing treasurer general Mpho Phakedi who beat the union's Western Cape regional secretary Sonwabile Fisa to the position.

Fisa was backed by 317 delegates and was pipped by Phakedi, who received 327 votes.

Diatile is the only woman in the NUM's top leadership structure.

National health and safety chairperson Duncan Luvuno held on to his position after being supported by 349 delegates, while his challenger, Abbey Hlakoana, who is the Free State deputy health and safety secretary and organised labour convener at the Mine Health and Safety Council, received 314.

Lefty Mashego is the new NUM national education secretary after beating KwaZulu-Natal regional secretary Muzikayise Zakwe by 343 votes to 322.The results were announced in the early hours of Saturday morning.

In his closing address, Balepile said the national congress had mandated the new leadership to unite the NUM as it has been divided for quite a long time.

"It is our duty as this collective elected by yourselves and, therefore, you have a duty to support the leadership that you have elected, irrespective of where they come from," he said.

Balepile said the two camps should be disbanded in order to unite the NUM. He warned that if the two camps were not dismantled the NUM would not be able to recruit new members.