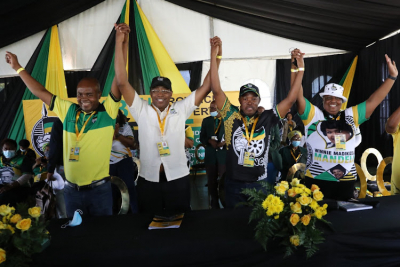 ANC President Cyril Ramaphosa has congratulated the newly elected provincial leadership of the party in Mpumalanga.

Ramaphosa delivered the closing address at the 3-day elective conference in Emalahleni on Sunday afternoon.

Over 700 delegates voted for Mandla Ndlovu and his allies as the Province's top 5.

Ndlovu once again threw his weight behind Ramaphosa calling on him to respond positively when branches ask him to return for a second term.

Ramaphosa said the weekend was "a significant milestone", and commended ANC Mpumalanga for hosting a "golden standard, violence-free" conference.

He also warned members against putting their own interests ahead of the party.

"We must rid ourselves of self-serving individuals who want an ANC that serves their interests. The ANC must always come first and individual interests must come second or last", said Ramaphosa.

Meanwhile ANC Eastern Cape chairperson Oscar Mabuyane's campaign to be re-elected has been given a boost, as a key region appears to be in support of his re-election.

While two regional conferences were scheduled for next week, it was widely expected that those in support of Mabuyane would also support a second term for party Ramaphosa.

During the Chris Hani regional conference at the weekend, Mabuyane criticised those who attempted to use money to influence conference outcomes.

"These and other un-organisational acts of ill-discipline we know were perpetrated by individuals who have seemingly convinced themselves that the ANC belongs to them and that nothing can happen or should happen unless they have their way, which, in the final analysis, has really nothing to do with the interests of the masses of our people," he said.

"This is why we still have comrades who insist on using courts of law to resolve internal organisational affairs that the ANC has the capacity to preside over."

More in this category: « Russia hits an oil processing plant near the port city of Odesa. Operations return to normal after refuelling glitch at King Shaka airport. »
back to top