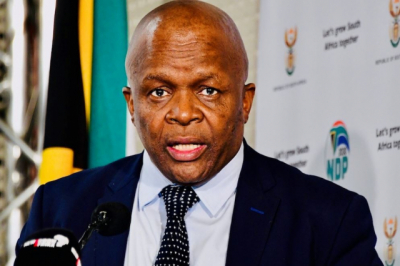 Minister in the Presidency, Mondli Gungubele, says the recovery of South Africa's economy, following the devastating impact of the COVID-19 pandemic will now be sped up even more.

The three were unpacking President Cyril Ramaphosa’s address to the nation last night where he announced that the country would be ending the National State of Disaster.

"We are now increasing speed in our efforts to revive our economy which has been negatively impacted by the pandemic," he said.

The Minister reflected that the measures that were taken when the first lockdown was announced were correct.

"[Monday] marked 750 days since we the country was placed under a National State of Disaster as a result of the COVID-19 pandemic. Yesterday evening the President addressed the nation and indicated that there is no doubt that the actions that we took then as government was necessary.

"Under these prevailing circumstances, the measures that we put, as indicated by the President, were effective in slowing down the rate of infection, easing pressure on our hospitals and most importantly, providing the time needed and necessary to ready ourselves and the country.

"We were able to develop the necessary infrastructure, pool resources and coordinate our capacity to manage the large number of people who became ill," Gungubele said.

Dlamini Zuma said the COVID-19 pandemic no longer qualified as a disaster.

In the place of the National State of Disaster, the country will be in a 30-day transitional post-disaster management period that will be legislated accordingly, with Dlamini Zuma saying the DMA "cannot be used permanently as it’s of temporary use".

As of Monday evening, the pandemic is being managed in terms of the National Health Act while the draft Health Regulations have been published for public comment – and which close on 16 April. Once the comments have been considered, the new regulations will be finalised and promulgated.

The Minister said, however, that Cabinet could revert back to the National State of Disaster should the COVID-19 pandemic escalate and reach a level where it became a disaster.

"If we look after ourselves, wear masks and make sure that we do what needs to be done… we may avoid a situation where this pandemic becomes a disaster again. That is what we’re hoping for. In the event that it becomes a disaster, we will have to revert back to the Act."

She said since the pandemic was still existent, government needed to introduce transitional measures which were allowed by the DMA and were post-disaster measures.

Phaahla, has encouraged South Africans to comment on the Health Regulations.

"The Health Regulations as in [the] Government Gazette will take effect immediately after the transitional measures have elapsed. The regulations in the main seek to introduce few amendments to the Surveillance and Control of Notifiable Diseases and Medical Conditions, to include Coronavirus (COVID-19) as such, "the Minister said.

"The Regulations, also deal with the requirements for persons entering the Republic of South Africa based on the epidemiological situation of such a notifiable medical condition, that in this case vaccination certificate and or negative PCR test not older than 72 hours shall be presented at the point of entry.

"We continue to receive enquiries about the fate of face masks, PRC tests post the 30 day period of the transitional measures, and we would like to reiterate that all these will be contained in the final health regulations.

"Thus, we would like to urge people to use this window period to help us shape the proposed health regulations to ensure they reflect the views and aspirations of our people as far as managing the current and future pandemics is concerned," the Minister said.

In the past few weeks, the country has been experiencing low levels of infections, just at 8% rate of infections, which is a manageable number and does not pose a threat to the health infrastructure.

The health minister stressed that the changes are amendments and not new laws.

"In terms of the overreach of the regulations, I want to dismiss that. We have no desire to have draconic powers. They say we want to micro-manage people, we are going to arrest people and force them to drink medication, but there is nothing like that.

"All that it says overall is that when there is a threat of notifiable medical conditions there will be times when, as an individual in the protection of the public, you can’t say when you are suspected of having Covid-19, when you have all the signs, you will be persuaded by the medical people. But if it reaches a stage whereby there is a real dangerous notifiable medical condition and you insist that you cannot be tested, then we can approach the court and the court can issue a medical order, "explained Phaahla.

More in this category: « Bonolo Ramokhele appointed as chairperson of SANAC Trust Board. Mixed reactions to lifting of Covid-19 national state of disaster. »
back to top