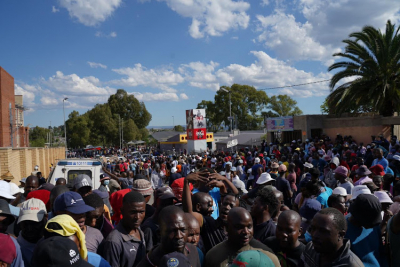 Police Minister Bheki Cele says at least 30 members of the police's tactical response team will remain in Diepsloot and 16 police vehicles will be positioned at the local police station over the next 24 hours.

Cele announced interim measures during a visit to the area to respond to demands by protesting Diepsloot residents on Wednesday.

Residents have listed issues like corruption, under-resourced and outnumbered police officers and the lax enforcement of immigration laws as some of the reasons why they were plagued by high levels of crime.

"The national commissioner is here and he's bringing extra special units of TRT [tactical response teams], we're bring POP to be here, people from metro, we're bringing a special detective's team to deal with the outstanding and cold cases, in the next 24 hours we're bringing 16 more cars.

"But for those things to work, we'll have to work together with the community here," Cele said.

It's unclear for how long the additional resources will be deployed to the area.

"We'll have to discuss with the community that we'll permanently assess together with the structures here," Cele added.

Operation Dudula leader Nhlanhla Lux joined the disgruntled community following Cele's address and Diepsloot residents said they will continue to protest overnight to make sure their plight is heard for better policing in the area.

Meanwhile Police had to fire rubber bullets and used stun grenades to disperse a crowd that was blocking the N14 highway.

More in this category: « SABC apologies to the communications minister over analogue signal switch-off. Solomon Mahlangu family calls for inquest into struggle icon's death. »
back to top