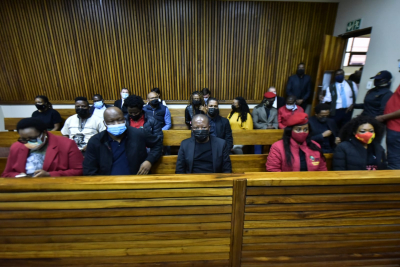 Economic Freedom Fighters (EFF) leader Julius Malema and Member of Parliament (MP) Mbuyiseni Ndlovu are back in the dock on Thursday.

The case against the duo will be heard in the Randburg Magistrates' Court.

Malema and Ndlozi are charged with assaulting a police officer Lieutenant Colonel Johannes Jacobus Venter at the funeral of Winnie Madikizela-Mandela at Fourways Memorial Park in April 2018.

The incident was caught on CCTV.

Malema and Ndlozi have pleaded not guilty to a charge of common assault, and claimed that Venter attempted to bar them from entering the cemetery to bid farewell to the struggle icon.

The EFF leader told supporters that all they did was defend themselves against  Lieutenant Colonel Johannes Jacobus Venter.

"We never attacked anyone… we defended ourselves against a white Afrikaaner. We put white supremacists at their rightful place. We are not our grandfathers and grandmothers and are not scared of whites."

The trial was postponed to 6 May due to the absence of a state witness who had been scheduled to testify.

In his evidence-in-chief during the previous appearance, Venter told the court he had been tasked with access control that day, and that the alleged assault was prompted by his refusal to allow Malema’s vehicle entry to the cemetery.

This was line with an instruction he had been given not to permit anyone other than the family or the president to drive in without permission, Venter said.

Video footage of the incident purports to show the duo pushing and shoving Venter after he refused their vehicle entry.

More in this category: « Government finalising plans to turn Postbank into state-owned bank. ANC is within its rights to embark on efforts to renew itself| Motlanthe. »
back to top