SA moved beyond the point of offering talk shops on economic recovery. 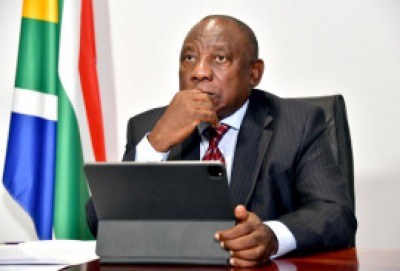 President Cyril Ramaphosa says government has made a concerted and concrete effort to rebuild the South African economy following the devastation caused by the COVID-19 pandemic on global economies.

"While the economy expanded by 4.9% in 2021, the impact of the pandemic continues to be felt throughout the economy and society. And we know that there is yawning gap between where we are and where we need to be," he said.

The President highlighted that government's decision to widen the social security safety net through the R350 Social Relief of Distress Grant which reaches at least 10 million people, only partly addresses the economic vulnerability that millions of South Africans were plunged into as a result of the pandemic.

Ramaphosa added that unemployment – as a root cause of this economic vulnerability – needs to be addressed to ensure that "no-one is left behind" in South Africa's economic recovery and reconstruction.

"Over the past few months, we have been in engagements with social partners to craft a social compact for job creation and economic growth. This compact will complement the Economic Reconstruction and Recovery Plan with a sharp focus on employment.

"As we emerge from the worst of the pandemic, we recognise that the crisis of economic exclusion that threatens to engulf this country can only be overcome through concerted action by all social partners. This social compact will focus on a clear set of actions by each social partner," he said.

Ramaphosa highlighted that throughout the past five decades, the country's Gross Domestic Product per capita has been on a steady decline with other countries surging in the opposite direction.

"We have to ask ourselves: why are we falling behind? The democratic government has developed inclusive policies and arrested this trend of divergence. But there is consensus that far more is required.

"With an economy stuck in low gear, battered institutions and declining productivity, an important strand of economic policy making over the past four years has been on fixing the fundamentals of the economy," he said.

A reformed and recovering economy

Despite all of the challenges facing the economy, Ramaphosa said government's reform agenda to create a more efficient government and business environment is fully underway.

Government's reforms extend to, among others, addressing the nation’s water and electricity supply, ensuring ease of doing business in the country, addressing climate change and raising skill levels within the workforce.

"Early [reform] successes include opening up the space for private sector energy generation accompanied by measures to create a competitive market structure in the electricity supply industry. Pro-competitive measures are also being implemented in ports and freight rail.

"The digital sector will receive a boost with the resolution of long-delayed processes of licensing of high demand spectrum and digital migration of broadcasting. Reforms…will ensure better management of the nation's water resources through measures aimed at improving allocation of rights, pricing and the monitoring of quality.

"To unleash the energy of the private sector…we have [also] created a Red Tape Reduction team in the Presidency to remove regulatory impediments to entry and growth,” he said.

The President emphasised that the country has moved beyond the point of offering talk shops on economic recovery and is now working to achieving it.

"This is the time to move beyond platitudes towards a clear set of commitment underpinned by concerted resource mobilisation by all parties.  We trust that the analytical work produced by this intellectual community will guide and enrich this effort, "Ramaphosa said.

More in this category: « FlySafair suspends a commercial flights aircraft to investigate technical error. Coronation date will be announced once it has been finalised| Buthelezi. »
back to top