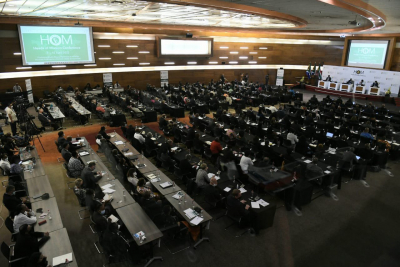 President Cyril Ramaphosa has told Diplomatic Heads of Mission that they are tasked with leading the drive to promote South Africa abroad and champion the message that the country is open for business.

The president said that in this period of reconstruction and recovery, the country’s foremost responsibility is to foster growth and employment.

Ramaphosa was speaking at the South African Heads of Mission Conference on Thursday, held at the Department of International Relations and Cooperation (DIRCO) in Pretoria.

South African representatives, the President said, are essential key players and actors on the global stage where the foundations of world diplomacy are facing an enormous shift.

"We count on you to market abroad the immense opportunities that exist in the South African economy," he said.

Each of the ambassadors, the President said, has an essential role to play in the implementation of the Reconstruction and Recovery Plan (ERRP).

He said that some Heads of Mission have taken the initiative in recent years to bring business delegations to the Investment Conferences and to the country’s tourism and mining indabas, film festivals and aerospace shows.

"This is the type of initiative we want to see. Our Heads of Mission should look at the needs of our various provinces and understand the type of industries that we need to help lift people out of poverty.

"In this respect, they can rely on the analyses undertaken as part of the District Development Model plans to decentralise and diversify our economy."

The President further called on the Heads of Mission to use all the diplomatic tools at their disposal to advance the political, economic and social interests of South Africa and the rest of the continent.

"The coming into operation of the African Continental Free Trade Area (AfCFTA) is the singular most important step towards continental economic integration. It is up to us to ensure its success.

"Our missions must be at the forefront of building networks and being part of activities to strengthen the AfCFTA," he said.

The President emphasised that the country's fortunes are inextricably bound with the security and prosperity of the continent.

Touching on the conflict in the Ukraine, he said it has had an extraordinary impact on global affairs and these developments will continue to define international relations into the future.

He said the conflict has caused extensive destruction and immense human suffering.

In keeping with the country's strong commitment to peaceful resolution of conflict, the President said they have urged the parties in this conflict to pursue a negotiated political solution.

"As a country, we are committed to the articles of the United Nations Charter, including the principle that all members shall settle their international disputes by peaceful means.

"We support the principle that members should refrain from the threat or use of force against the territorial integrity or political independence of other States," he said.

The President went on to say the conflict has exposed the inability of the UN Security Council to fulfil its mandate of maintaining international peace and security.

He said the current formation of the UN Security Council is outdated and unrepresentative.

"It disadvantages countries with developing economies. The entire peace and security architecture of the United Nations needs to be overhauled.

"Decision-making needs to be democratised so that the Council can be true to its mandate and move beyond the paralysis brought about by a few member States, "he said.

"We are deeply concerned about the broader implications of the conflict in the Ukraine for global economic recovery. It has disrupted global supply chains, driven up the price of essential commodities and plunged the world into a new era of economic instability and uncertainty," he said.